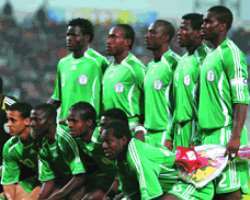 Nigeria's senior football team, Super Eagles, arrived in the United Kingdom Saturday evening and have settled down to the business of final preparation for the 2010 FIFA World Cup finals.

Players and technical crew members flew out to London aboard a British Airways flight from the Nnamdi Azikiwe International Airport, Abuja on Saturday morning and were able to make it to the Five Lakes Hotel and Country Club, Essex by evening.

The other players who did not travel down to Nigeria for the send forth dinner with President Goodluck Jonathan, namely Yusuf Ayila, Dickson Etuhu, Vincent Enyeama and John Utaka, were already waiting in at the camp. Midfielder, John Mikel Obi, is still in London recuperating from injury, but the team's medics were travelling to London Sunday afternoon to ascertain if he should remain with Chelsea's doctors or come to camp.

The team had its first training session with a light work-out at the hotel's training facility, ahead of Monday's departure to Wattens, Austria for the international friendly against Saudi Arabia. However, forward Brown Ideye will be joining up with the team during the week after it was discovered that his work permit had expired.

His French Club, Sochaux, had issued him a pass to travel to the United Kingdom (UK), but only through Paris. The Nigeria Football Federation (NFF) bought him an Air France ticket only to discover that his work permit had expired. He was immediately flown to Lagos, so that NFF officials could process for him a United Kingdom entry visa early in the week.

Nigeria take on Saudi Arabia at the Alpenstadion Wattens on Tuesday evening, in the first of a three-match run ahead of her first outing at the 2010 FIFA World Cup finals against Argentina. On May 30, the Eagles will play Colombia in London, 24 hours before Coach Lars Lagerback will unveil his 23-man final squad for the World Cup.

Six days to the team's clash with Argentina, the Eagles will play fellow World Cup finalists, North Korea, in Johannesburg.