Finally, US ready to sell high-tech attack planes to Nigeria 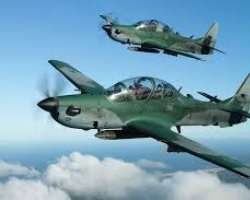 The United State is said to be ready to sell high-tech aircraft to Nigeria for its campaign against Boko Haram Islamic extremists, thewillnigeria.com has reported.

Under the arrangement,  Nigeria will purchase  up to 12 Embraer A-29 Super Tucano aircraft with sophisticated targeting gear for nearly $600 million, one US official said.

According to the report, the officials were not authorized to discuss the terms of the sale publicly and requested anonymity to speak about internal diplomatic conversations.

The publications further indicated that the   the Obama administration had planned to approve the deal at the very end of Barack Obama's presidency.

Though President Donald Trump has made clear his intention to approve the sale of the aircraft, the National Security Council is still working on the issue. Military sales to several other countries are also expected to be approved but are caught up in an ongoing White House review.

Nigeria has been trying to buy the aircraft since 2015. Sen. Bob Corker, R-Tenn., the chairman of the Foreign Relations Committee, said last week that he supported the A-29 deal to Nigeria as well as the sale of U.S.-made fighter jets to Bahrain that had been stripped of human rights caveats imposed by the Obama administration.

Under Obama, the U.S. said Bahrain failed to make promised political and human rights reforms after its Sunni-ruled government crushed Arab Spring protests five years ago. “We need to deal with human rights issues, but not on weapons sales,” Corker said.

The State Department said in a 2016 report that the Nigerian government has taken “few steps to investigate or prosecute officials who committed violations, whether in the security forces or elsewhere in the government, and impunity remained widespread at all levels of government.”

Amnesty International has accused Nigeria's military of war crimes and crimes against humanity in the extrajudicial killings of an estimated 8,000 Boko Haram suspects. President Muhammadu Buhari promised to investigate the alleged abuses after he won office in March 2015, but no soldier has been prosecuted and thousands of people remain in illegal military detention. Nigeria's military has denied the allegations.