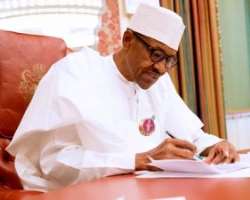 President Muhammadu Buhari has directed the Acting Chairman of the Economic and Financial Crimes Commission (EFCC), Mr. Ibrahim Magu, the Attorney-General of the Federation (AGF), Mr. Abubakar Malami, Governor of the Central Bank of Nigeria (CBN), Mr. Godwin Emefiele to provide a detailed submission on amount of monies recovered so far by the anti-graft agencies, in its anti-corruption war, since the inception of this administration in June, 2015.

Also directed to do same are the Director-General of the Department of State Services (DSS), Mr. Lawal Daura, the Chairman of the Independent Corrupt Practices Commission (ICPC), Mr. Ekpo Nta and the National Security Adviser (NSA), General Babagana Monguno.

The agencies were also directed to submit a detailed inventory of assets seized,  including vehicles, jewelry's and other valuables, latest by yesterday, Friday April 7, 2017.

They were ordered to submit the details of recovered monies and assets in their possession also by yesterday.  THISDAY checks revealed that most of the agencies except the EFCC have since complied with the deadline given by the president.

As at the time of filing in this report yesterday night, it was not certain if the EFCC Chairman, had complied with the directive which lapsed yesterday.

THISDAY gathered that the directive by the President was issued to the agencies two weeks ago.

The source said that the directive was informed by the need to “place a value on the total recoveries made by the government, whose anti-graft prosecutors have been accused of being unable to secure convictions, but have been quick to announce their seizures, even temporary ones to the public.”

It added that the President needed the inventory to ensure transparency and accountability as rumours of untoward practices continued to swell round the recoveries.

There have been allegations that some of the seized valuables like land documents, cars and vehicles had been stolen by some officials of the agencies that seized them.

The source said: “In fact, in several yards across the country, vehicles seized by EFCC like Range Rovers, Jaguars, Prado jeeps, and expensive cars are decaying. The cars are allowed to rot, leading to massive waste.”

“Also remember that certificates of occupancy seized from the home of an ex-governor were found in the market, where some EFCC officials were allegedly trying to sell them. The case is now with the police. Also at the Senate hearing for his confirmation, Magu was unable to put a figure or an estimate to the amount of monies, local and foreign currency, he has recovered so far, or provide a value to properties, cars and jewelries that have been seized,” the source added.

When THISDAY contacted Senior Adviser to the President on Communication, Mr. Femi Adesina on details of directive, he stated that he was unaware of it but that the president had been receiving series of briefings since he returned to the country and that the said directive would be nothing out of the ORDER.