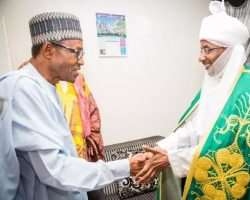 The Emir of Kano and former governor of the Central Bank of Nigeria, CBN, Muhammadu Sanusi ll, has said the President Muhammadu Buhari administration's economic model would not work as it will incur more debt.

For Sanusi, the Federal Government is borrowing unsustainably.

The former governor who spoke at  the Kaduna State Economic Summit in Kaduna on Wednesday, April 6 on the theme: 'Promoting investments in the midst of economic challenges,'  frowned on the situation where  government is spending 66 per cent of its revenues to pay interests on debts.

The former CBN governor said the North, as a region, constituted the highest of the nation's population, but lacked the necessary indices for progress.

Sanusi, who said the Federal Government was borrowing  noted that currently, Nigeria was spending 66 per cent of its revenues to pay interests on debts, saying such a model would not work.

“The Federal Government of Nigeria is spending 66 per cent of its revenues on interests on debts, which means only 34 per cent of revenues is available for capital and recurrent expenditures.

He wondered when the Federal Government would stop borrowing if the government was spending 66 per cent of its revenues to pay interests on debts.

The Emir said government at all levels should realise that borrowing had reached its limit and should therefore look for ways to attract investments.

The monarch added, “We have governors; they go to China and spend one month on a tour and what do they come back with, MoU (Memorandum of Understanding) on debts.

“At the end of the day, what do you benefit from it? Your citizen will ride on a train and when you ride on a train, in northern Nigeria, in a state like Kano or Katsina, where are you going to? You are not going to an industrial estate to work.

He stated that the North-West and the North-East would have been the poorest in the world, if they were a nation.

“Nobody saw this because we were looking at Nigeria as a country that averages the oil-rich Niger Delta, the industrial and commercial-rich Lagos, the commercially viable South-East, and you have an average.

“Break Nigeria into its component parts, and these parts of the country are among the poorest, if it were a country. And we do not realise we are in trouble.”

Sanusi said for the region to leap forward developmentally, it must fix it social and religious problems.

He pointed out that women and children must be loved, not beaten, adding that the region must do away with the 13th century mindset of religion and culture.

He added that the northern Muslims had adopted an interpretation of culture and religion that was rooted in the 13th century mindset, which refused to recognise that the rest of the Muslim world had moved on.

He recalled that books, preaching love, were being burnt in northern Nigeria, calling for a better interpretation of Islamic views so that better life could be provided for women and the girl-child.

Sanusi stated, “We need to understand the roots of the problem of northern Nigeria. Burning books, it happened in Kano. What is the crime of those books? They were writing about (love), and love apparently is supposed to be a bad word.

“We have adopted an interpretation of our culture and our religion that is rooted in the 13th century mindset that refuses to recognise that the rest of the Muslim world has moved on.

“Today in Malaysia, you wake up and divorce your wife; that is fine. But you give her 50 per cent of all the wealth you acquired since you married her. It is a Muslim country. In Nigeria, you wake up after 20 years of marriage, you say to your wife, 'I divorce you', and that's it.

Sanusi also knocked the Governor of Zamfara State, Abdulaziz Yari, on his comments on meningitis, which has killed no fewer than 200 persons in the state.

The governor had, on Tuesday, blamed the deaths from meningitis attack on the sins of the people against God.

But Sanusi said he was pained that a governor should make such an outrageous statement when he was supposed to look for vaccines to stop the deaths.

“I'm sorry about a current issue yesterday (Tuesday). Two hundred people died of meningitis in a state, the governor was asked and he said it was God's curse on us for the sin of fornication, which does not happen in America, which is why they don't have meningitis,” he said.

The monarch, who has a degree in Islamic Law, added that such a statement shouldn't have come from the governor, insisting that he(Yari) should have treated those who had contracted the disease.

He lamented that while Nigerians were thinking of how to come out of the economic recession, the executive and National Assembly were busy fighting each other on political issues.

Sanusi stated, “If you have been reading and watching the news for the last one month, the big and concerned news politically is about leadership but unfortunately, the conversation is not about electricity, infrastructure, education, health care.

“All the conversations are about the National Assembly, the executive, the judiciary, conflict between this politician and that politician as well as confirmation of the EFCC boss.”

Appealing to politicians, he said, “Let us stop playing politics and talk about education and health care. When we get to late 2018, you stop working and politicise, we will understand that, but for now, it is too early. You can't be in politics for four years.”