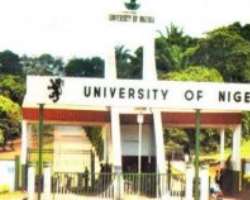 A first full-fledged university embedded technology community in West Africa has oppened in the University of Nigeria Nsukka.

Named 'Roar Nigeria Hub', the centre is located at the Nsukka campus.

It is a  private sector driven initiative by two engineering graduates of the university, Charles Emembolu and Okechi Igwebuike.

Reports indicate that the centre  will serve the Institution with a student population of nearly 40,000 and 12 institutions of higher learning within an hour drive from Enugu city.

The Hub is on a mission to produce the next generation of entrepreneurs by providing an enabling environment, support systems and relevant skills to succeed with technology entrepreneurship, across the South East region while impacting the IT ecosystem in Nigeria.

Confirming the establishment of the Hub, Emem Seudieu, the University Advancement Centre Executive, said that Roar Nigeria Hub is a community that provides professional support to technology enabled startups, researchers, entrepreneurs and SME's. “Their programs are designed to develop a new generation of innovators and creators that will provide local technology based solutions with a global perspective. The Hub is destined to be a hotbed of ideas, invention and market induced solutions created with the concept of a triple helix; an interaction between Academia, Industry and Government (AIG).

A report by Nigeria CommunicationsWeek indicates that doors to the Hub opened late 2016 with the first pitching event held on January 26th, 2017 titled Tech&UNN.

At the event, Professor Benjamin Chukwuma Ozumba, vice chancellor, shared his dream of creating an Ecosystem that will fuel unprecedented technology growth in Africa.

The official hub launch was held on February 6th, 2017 which coincided with a Pitchaton by teams from the school community and hosted by the Vice Chancellor.

“We shall be having a public introduction of the Roar Nigeria on April 26th, 2017 at the hub in University of Nigeria Nsukka campus.

“The hub will create employment by increasing local content in information, communication and technology sector and establish the triple helix concept by improving collaboration between the Academia, Industry and Government”, she said.