THE ROLE OF AGRICULTURE IN HARNESSING NIGERIA'S ECONOMY 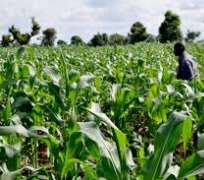 Agriculture involves the science, practice and occupation of

cultivating land and raising crops. It also involves the feeding

breeding and rising of livestock. The main purpose of agriculture is

to provide food and raw materials for human use. The fact that Nigeria

is richly blessed with abundant human and natural resources is one

point that has been consistently repeated in various forces. The

relatively divers climatic conditions in Nigeria makes it possible to

raise a wide range of crops across the country. The major crops grown

in economic quantities in Nigeria are beans, sesame, cashew nuts,

cassava, groundnut etc.
Nigeria is on its way to modern development. Branding itself as the

‘’giant of Africa’’, the country now needs to prove its potential by

raising its standards to a level with other fast developing economies

of the world. The agricultural sector in Nigeria is undoubtedly the

highest employer of labor, employing about 70percent of the Nigerian

labor force.
For decades, agriculture has been associated with production of

essential food crops. At present, agriculture above and beyond farming

etc. Today, processing, marketing and distribution of crops and

livestock products etc. are all acknowledged as part of current

agriculture. Thus, agriculture could be referred to as the production,

economy. Agriculture is the backbone of economic system of a given

country. In addition to providing food and raw material, agriculture

population.
Approximately 70 % of the people directly rely on agriculture as a

mean of living. This high percentage in agriculture is as a result of

none development of non-agricultural activities to absorb the fast

growing population. However, most people in developed countries do not

engage in agriculture. Contribution to National revenue Agriculture is

the main source of national income for most developing countries.

However, for the developed countries, agriculture contributes a

smaller percentage to their national income. Supply of Food as well as

provides people with milk which is a form of protective food.

items of exports of countries that rely on agriculture. If there is

smooth development practice of agriculture, imports are reduced while

unfavorable balance of payments as well as saving foreign exchange.

This amount may be well used to import other essential inputs,

machinery, raw material, and other infrastructure that is helpful for

the support of country’s economic development. Marketable Surplus The

growth of agricultural sector contributes to marketable surplus. Many

people engage in manufacturing, mining as well as other non-

force that reduce the high rate of unemployment in the countries

caused by the fast growing population. Economic Development Since

agriculture employs many people it contributes to economic

development. As a result, the national income level as well as

people’s standard of living is improved. The fast rate of development

in agriculture sector offers progressive outlook as well as increased

motivation for development. Hence, it aids to create good atmosphere

for overall economic development of a country. Therefore, economic

Source of Saving Development in agriculture may also increase savings.

revolution. This surplus quantity may be invested further in the

agriculture sector to develop the sector. Food Security a stable

agricultural sector ensures a nation of food security. The main

malnourishment that has traditionally been believed to be one of the

major problems faced by the developing countries. Most countries rely

on agricultural products as well as associated industries for their

main source of income. Finally Nigeria would be leading the world in

food production if this huge workforce can be diverted towards