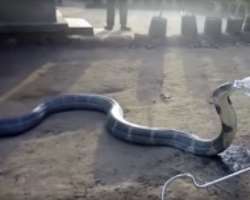 Here's something you don't see every day.
Video captured a massive king cobra appearing to drink out of a man's water bottle amid extreme droughts across southern India.

The extremely venomous reptile ―  described by Caters News as 12-feet long ― is seen turning to the higher ups, who cautiously pour the water while holding its tail and a hook near its head, presumably in case it turns on them. The people in the video are wildlife rescue workers, according to Caters.

[TUBE][/TUBE]
The video was reportedly shot from a village in Kaiga township. A similar video uploaded to YouTube in 2014 shows a man sharing a drink with another cobra but in an unknown location. (Talk about friends in low places.)

According to Smithsonian's National Zoo, king cobras can grow up to 18 feet in length. Though they're considered to be aggressive snakes, they're said to attack people only went cornered or trying to protect their eggs.

“Throughout its entire range from India to Indonesia, the king cobra causes fewer than five human deaths a year, about one-fifth as many as caused by rattlers in North America,” the zoo's website states.