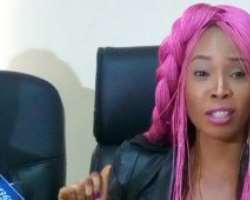 Stephanie Otobo, the 23 year-old lady who claimed that Apostle Johnson Suleman had a romantic affair with her, was docked today in Lagos by the Nigerian Police.

She was docked at a Tinubu Chief Magistrate's Court, and accused of conspiracy, blackmail, threat to life and an intent to steal.

She was charged along with a 43 year-old, man identified as Wisdom Godstime.

The prosecutor, M. A Animashaun, informed the court that the defendants and others at large committed the alleged offence on February 14, 2017, at about 10:30am, at Police College, Ikeja Lagos.

PMNEWS quoting court papers said the duo conspired amongst themselves to steal by demanding for property with menaces and an attempt to extort money. The Prosecutor also stated that the defendants with intent to blackmail Suleman, unlawfully demanded the immediate payment by Suleman of $1million to Stephanie.

Suleman is the president and founder of Omega Fire Ministry Worldwide.

The Police claimed Stephanie threatened to call a press conference, where she would accuse Suleman of adultery and and having illicit relationship with her and threatening to kill her.

.
According to the police, the offences alleged to have been committed by the two defendants are punishable under sections 411, 301 and 303 of the criminal law of Lagos state 2015.

Both Stephanie Otobo and her co-defendant pleaded not guilty to the charge levelled against them.

Magistrate Mrs Kikelomo Bukola-Ayeye, in her ruling granted the defendants bail in the sum of N100, 000 with two sureties in like sum, who must be gainfully employed.

Magistrate Ayeye, On 6 March, had refused a request to remand Stephanie and Wisdom Godstime, on the grounds that there was no substantial evidence before the court for such an order. In the application for remand, the police said that Wisdom and Stephanie were suspected to have threatened and blackmailed the man of God.

Consequently, after the arraignment, the Magistrate ordered that the defendants should continue with the bail earlier granted them.

The case has been adjourned till 27 April for the trial.