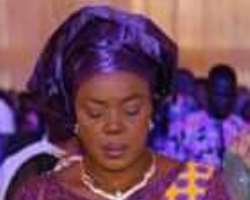 The wife of the Delta State Commissioner for Information, Barr. Mrs. Perpetual Ukah, has urged Nigerians to pursue peace with all men and live good lives that are worthy of emulation.

Mrs. Ukah made the call Sunday in an interview with journalists shortly after a thanksgiving service held at St. Emmanuel the Saviour Catholic Church, Asaba.

The thanksgiving service was part of activities commemorating the one year anniversary of her late mother, Deaconess Francisca Nwabunor Ebube, who died at 73.

While recalling her wonderful times with her late mother, the Commissioner's wife observed that late Mrs. Ebube taught her everything she needed to become a virtuous woman, except "how to live without her".

Earlier in a homily titled "The Living Water", the Parish Priest, Rev. Fr. Charles Okeke, urged the congregation to continually seek eternal life which, according to him, can only be found in Jesus Christ.

Rev. Fr. Okeke explained that the living water symbolizes the spirit of God which is capable of quenching any thirst and granting lasting peace to men, adding that unless a man's path is guided by God, he will always remain confused and insatiable in the quest for power and pleasure.