By Niger State House of Assembly 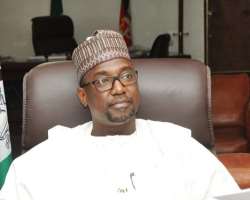 Niger State House of Assembly has commended the State Executive, for its policies and Programmmes to ensure deliberate plan to transform the deplorable and lingering challenges faced by the water sub- sector of the State, in order to Supply potable water to the citizens for domestic, industrial and Agricultural needs of the People.

Chairman of the House of Assembly Committee on water Resources and Member Representing Mariga Constituency, Hon. Ibrahim Iliyasu, disclosed this when the officials of the State Ministry of Water Resources led by the Hon. Commissioner, Alh. Abubakar Idris Azozo, Management and Chief Executives of Departments and Agencies of the water sector in the state, appeared before the committee of the House to defend their 2017 budgetary allocation at the Assembly Complex.

Hon. Ibrahim Iliyasu also assured the officials of the Ministry that the Committee will improve its oversight responsibilities to make sure that the commendable initiative of the present Administration is actualized in that direction and advised the officials of the Ministry to partner with the committee through proper working synergy in the discharge of their respective statutory functions.

In his remarks, the Vice Chairman of the Committee, Hon. Mohammed Alhaji Haruna, member representing Bida South Constituency, also commended the state government to solve the lingering water problems in both the urban, semi urban and rural communities and assured that the legislature, will do the needful to domesticate all relevant laws, that will enhance adequate water supply to citizens for all uses, especially the proposed Bill of the State Executive on the National Water Supply Policy, as soon as the House receive that Communication in the State.

In his submission, the Hon. Commissioner for water resources Alh. Abubakar Idris Azozo informed the House Committee that the Ministry was allocated with the sum of N5.805Billion for 2017 which he complained as inadequate, considering the quantum of problems especially the turnaround maintenance of Minna and Suleja water supply facilities, construction of Kontagora conventional water treatment plant expected to commence this year.

Other highlights of the 2017 projects earmarked by the Ministry of Water Resources, as enumerated by the Commissioner were Rural water supply, Completion of ongoing projects started in 2016, construction of motorized and hand pump boreholes in some communities expected to be supplied.

In his own remarks, the Permanent Secretary of the Ministry of water Resources, Alh. Abubakar Sadiq Idris, informed the committee that arrangement has reached advanced stage, to send the draft Bill on the National Water Policy Scheme for the legislature’s consideration, aimed at transforming the water Scheme of the state and appealed to the committee to collaborate with the ministry for accelerated passage into law.

The Permanent Secretary also explained that top officials of the ministry has recently visited Germany to inspect some water works equipments order by the State Government with a reputable Germany Manufacturing Company and are expected to arrive the State soon which will ensure the general overhaul of Water works in Minna, New Bussa, Bida and Kontagora, to boast adequate water supply in these areas.

Meanwhile, the two top officials of the Ministry then commended the giant strides of the present Administration, under the abled leadership of the Governor, Alh. Abubakar Sani Bello to stabilized the problems of water supply for the urban and rural dwellers and pledged to fully cooperate with relevant key stakeholders to achieve the desired results, especially the legislature in the State.

In the meantime, some of the challenges faced by the Ministry as highlighted for 2016 was the fluctuation in exchange rate of US Dollar ($) to the Naira which affected the procurement processes and caused unexpected delays in the placement of order for offshore equipments, which hamper contractors to make prompt supply of vital equipments.

Delay in funds release from relevant MDA’s, after due approvals of request non availability of some vital parts and equipments in Nigeria. Finally, the Commissioner solicited for the assistance of the House Committee for prompt fund releases by the relevant MDA’s and increase statutory budgetary allocations.