WHO WINS THE UEFA CHAMPIONS LEAGUE? 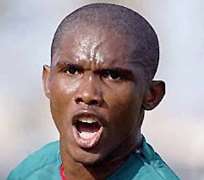 Today's UEFA Champions League match between four time winner, Bayern Munich, and two time winner, Inter Milan, goes beyond a contest between players of both sides because of the involvement of two coaches, who once worked together.

Inter coach Jose Mourinho was assistant to Bayern coach Louis van Gaal between 1997 and 2000 at Barcelona. Apart from getting the chance under Bobby Robson to cross over from an interpreter to managerial work, van Gaal, who succeeded Robson at Barcelona helped in moulding Mourinho's future after noticing the enthusiasm in him.

Both coaches have moved on to greater height with van Gaal winning the Dutch League with modest side AZ Alkmaar, the German Bundesliga and German Cup with Bayern Munich. Mourinho has also achieved tremendous success with Porto and Chelsea.

Both coaches are facing each other for the first time as managers, making the venue, Satiago Bernebeu, in Madrid a stage for the teacher and his former student to fight for honour. For the teacher, it is a honour for both men to remain relevant at the top of world football.

Haunted by 45 year wait
The last time Inter won the title was in 1965 when it beat Benfica 1-0 in the final played at San Siro, Italy. Inter again made it to the final in 1972 but lost to Ajax and since then, it has struggled to stage any significant return to Europe's podium of glory although it won the UEFA Cup in 1991, 1994 and 1998.

Inter continued to stay behind the best clubs in European club football even when bribery scandal which rocked the Serie A offered the club the opportunity to win the Scudetto since 2006. Apart from sustaining the club's dominance in Italy, Mourinho moved a step further by reaching the final of the Champions League; the first time for the club since 1972.

Unlikely finalists
Based on recent history of the two clubs in the final, the dominance of the English Premier League and the dreadful Barcelona squad, Inter and Bayern were not given the chance to reach the final. Yet, both teams crushed oppositions from the English league and La Liga.

With van Gaal expertise, Bayern saw off the challenge of Manchester United who was the favourite team to play in the final. Yet Bayern stopped the then Premier League champion in the quarterfinals stage.

Outspoken Mourinho boasted that he would stop Chelsea, a team he once managed, when both teams were pitched against themselves in the knockout stage. Not only that he beat the English club in Italy, Mourinho visited Stamford Bridge and completed the job with a 1-0 victory. Barcelona was expected to stop Inter but on both legs in the semifinals, Inter had better outing to reach the final.

Danger men
Both teams have earned their places in the showpiece event after some fine displays but individual moments of genius from Bayern's Arjen Robben and Inter's shrewd defence will provide some of the enduring memories from the tournament.

Undoubtedly, Robben is the player of the tournament. His ability to take on defenders, run and score from anywhere near the box stands the Dutchman out. Bayern would have been the pre-match favorite for the title if Franck Riberry had not been suspended but the Frenchman misses the final and his partnership with Robben.

Robben's goal against Man United says all one needs to know about a player for whom the big stage suits. The former Chelsea forward has an eye for brilliant moment this season in the Champions League. But he needs to beat the defence ingenuity of his former boss, Mourinho, in the final.

Apart from Inter's tight defence, Mourinho will rely on Samuel Eto'o's dynamism in the attack. The Cameroon captain left his role in the heart of the attack against Barcelona, switching to the right to deliver defence-piercing passes from which his teammates nailed the title holder in the first leg of the semifinal match. Eto'o will be eager to add to his daunting profile by scoring in three Champions League finals, with Dutchman Wesley Sneijder and Serbian Dejan Stankovic pulling the strings behind him in midfield.

Today's duel boasts of its share of remarkably talented players but it is the battle of the coaches that is the most fascinating aspect of the game.