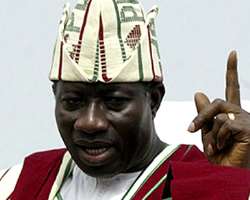 Indications emerged on Friday that the leadership of the Peoples Democratic Party is set to dump the party's zoning arrangement aimed at alternating power between the northern and southern parts of Nigeria.

Saturday Punch learnt on Friday that a final decision on the rotational arrangement that is currently generating divergent views would be taken as soon as a successor to Chief Vincent Ogbulafor emerges as the new PDP chairman.

The party's zoning arrangement has come under criticism since President Umaru Yar'Adua died and many interest groups began to urge his successor, President Goodluck Jonathan, to run for the presidency in the 2011 general election to complete what would have been Yar'Adua's eight-year tenure.

Already, our correspondent gathered that members of the PDP National Working Committee had started having a rethink over the rotational presidency.

It was gathered that the NWC, which had been polarised over the matter, adopted their new attitude to zoning after the resignation of Ogbulafor. The former PDP chairman had said sometime before the death of Yar'Adua, after a meeting he had with some governors elected on the platform of the party, that PDP would still zone the presidency to the North in the 2011 general election.

This had caused spontaneous reactions across the country, with several organisations reprimanding Ogbulafor who has since given a month notice of his resignation, following his arraignment in court for alleged corruption.

Speaking with newsmen in Abuja on Friday, the party's National Auditor, Chief Samuel Ortom, hinted that the zoning arrangement would be jettisoned.

Ortom allayed fears of many Nigerians that the zoning arrangement was capable of causing chaos in the party and in the country as a whole.

He also urged Nigerians not to see the arrangement as final, adding that after all, people from the North contested against President Olusegun Obasanjo during the party's presidential primary election in 2003.

He said, 'It has become imperative for me to make this clarification. Though there is position of zoning in PDP's constitution, it is not a rigid arrangement.

'It is a flexible arrangement made by the forefathers of this party who wrote this constitution.

'But I want to let the public to know that since 1999 when this party came into existence and started election and appointment of political offices, there has never been a time that anyone has been excluded who is interested in vying for any position in this party, whether you are from the south or east or from the north or west.

'They were allowed to participate. They went through the process as enshrined in the Constitution and the guidelines and a candidate emerged at the end of the day, and we jointly worked together for the success of our party.

'So, I want to make it very clear that the controversy about 2011 zoning or no zoning, Article 7.2 (c) of the PDP constitution talks about rotation and zoning, but it is not rigid.

'And so, President Goodluck Jonathan is free to contest election if he so wishes or desires at any time.

'Though there can be zoning arrangement in the PDP constitution, which is an internal arrangement, the most important and ultimate thing is the constitution of the Federal Republic of Nigeria, which allows every Nigerian the freedom to associate and to express himself. So, every Nigerian is free to contest, not minding the zone he is from.

'Zone is not going to stop anybody from contesting. So, those who are heating the polity unnecessarily about zoning or no zoning should stop and allow Mr. President to face the challenges that we have in this country.

'I think that instead of wasting energy talking about zoning, we need to jointly put our hands together and pray and support the President to ensure that he brings dividends of democracy to the Nigerian people.

'We all agreed in this country that we have challenges and the President alone cannot make it. We need to support him.'

He said the party would follow the party's constitution, which stipulates how candidates for different elective positions would emerge.

Article 7.2 (c) of the PDP constitution reads, 'In pursuit of the principles of equity, justice and fairness, the party shall adhere to the policy of rotation and zoning of the party and public elective offices, and it shall be enforced by the appropriate executive committee at all levels.'

A member of the party's NWC, who spoke with our correspondent in confidence, said there was no time the members deliberated on the matter, adding that what Ogbulafor said then was his personal opinion.

He also suggested that the former chairman could have been manipulated by some governors into doing so.

Nkpubre, who spoke in an exclusive interview with our correspondent in Abuja, assured Jonathan that the zone would stand by him anytime he declares to run.

He also debunked insinuations in some quarters that governors from the zone were against the emergence of Jonathan.

He said, 'All that are lies calculated to malign our people. They have been meeting and I have the record of their meetings. At no time did they take a decision not to support him.

'I need to tell you that we are in his support and we will express it the more when he decides to run.'

He said Nigerians should not see the resignation of Ogbulafor as an attempt by the President to cling to power at all cost, saying 'the president has made it clear that the fight against corruption will be re-invigorated. The chairman resigned because he believed that there is a moral burden on him.'