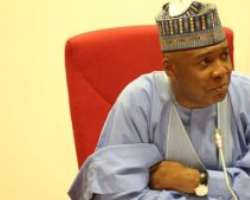 The Senate on Tuesday shutdown the order of the Nigerian Customs Service to vehicle users to be ready to produce the authentic duty papers on demand by the service or have the vehicle impounded.

The NCS had given a one-month ultimatum  to  vehicle importers  and other owners who were yet to pay duties on such vehicles to do so or lose them.

The ultimatum was given by the Customs Comptroller General, Rtd Col Hameed Ali last week.

The Senate in a resolution on Tuesday  halted the ultimatum until the leadership of the Customs appears before its Committee to explain rationale for such an ultimatum especially for vecles that have been long in use within the country.

The Tuesday motion was moved by the Deputy Leader, Bala Na'Allah, who described the order by the customs as very serious.

Senator, Dino Melaye, explained that it could not have been possible to clear any vehicle from the ports with the collaboration of the Customs.

The Senate President Saraki Saraki while ruling on the matter said it was the duty of the Senate to protect the welfare of Nigerians.

The Customs had threatened to impound any vehicle whose owners did not pay duties after the one month grace period.

However, the President of National Council of Managing Directors of Customs Agents, Mr Lucky Amiwero had faulted the Customs Comptroller General on the one month grace period.

Amiwero ondered how the customs boss wants people who bought cars some years back to start now to go and verify whether the duties they paid were correct or not.

“Such order will create confusion. Beside, the CG has no power to issue such directive on grace period. It is the minister who should do so. There is no law that gives the CG such powers”.

Amiwero argued that since such vehicles have entered free period, their owners ought to be left alone, adding that it was like Customs going to the market to seize goods as they have no such power.

He equally condemned the idea of customs raiding markets, adding that this was illegal.

According to him, customs can only raid premises or warehouses but not markets, like the case of Sango market women who claimed their shops were raided and bags of rice carted away.

There has been confusion since the Customs boss gave the directive.

Observers are however of the opinion that the order may have been meant to allow owners of vehicles trapped at the border stations to pay duties and bring them in.

This was as a result of claims by some agents that so many vehicles were not cleared as at the December 31 deadline given to owners to clear after the ban in the first week of December last year.

The CG's statement issued by the Public Relations Officer, Mr Joseph Attah on the vehicles had read,

“The CGC therefore calls on all persons in possession of such vehicles to take advantage of the grace period to pay appropriate duties on them, as there will be an aggressive anti-smuggling operation to seize, as well as prosecute owners of such smuggled vehicles after the deadline of Wednesday 12th April, 2017.

“For the avoidance of doubt, all private car owners who are not sure of the authenticity of their vehicles' customs documents can also approach the zonal offices to verify their status with a view to complying with the provision of the law.”