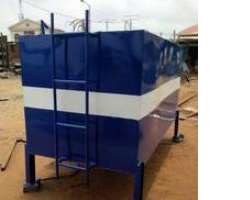 Recently, the national leadership of the Association of Surface Tank

Council meeting in Abuja, where they deliberated on the challenges

currently facing activities of their members as well as the prospects

for members.
After a general review of its activities, it was observed that part of

the challenges facing members are incessant police harassment and

by the country's main oil company, the Nigeria National Petroleum

Corporation (NNPC).
Specifically, the group lambasted officers and men of the Nigerian

Police Force who allegedly extort money from their members and disrupt

their businesses despite the fact that they are duly registered and

have their operating license from the Department of Petroleum

Resources (DPR), the government agency saddled with the

responsibilities of regulating oil and gas activities in Nigeria.

members.
The group accused the NNPC of only paying attention to members of the

Independent Petroleum Marketers Association of Nigeria and members of

the Major Oil Marketers Association of Nigeria (MOMAN), while

neglecting its own members despite its huge contribution to Nigeria's

economy.
The group particularly berated the NNPC for not showing enough concern

towards the development of rural economy which is what their members

are boosting in no small way.
As a group that serves as the bridge between the rural economy and the

urban economy, members of ASTORGRN does not deserve the current

discouraging treatment they are getting from the NNPC says Prince

Marcus Okotete, an operator in the downstream sector.

ASTOGRN State Chairmen that attended the meeting were; Chief Akinola

Anna A. Asachaya of Adamawa State and Banyulla Halla of Gombe State.

In similar vein, Board of Trustees members of the group includes;

However, it amounts to hypocrisy of government's deregulation policy

their product from the NNPC.
By focusing only on operators of Filling Stations, the NNPC and other

related bodies that have connived to deny ASTOGRN members patronage

dwellers that travel many kilometers to get petroleum products for

local use.
How can the rural economy grow without getting these essential

commodities as easily as possible?
Does that mean the NNPC is discriminating against the rural dwellers

and their economic wellbeing?
When has it become an offence to live in the rural and semi-urban

investors to establish private refineries in the country, but how will

the product of these refineries get to Nigerians without ASTOGRN

members who takes the product to the rural people? Is it not a one

the current economic recession, yet the police and the NNPC are not

really looking at that direction.
Just imagine the kind of stress rural dwellers would have been

subjected to without the intervention of ASTOGRN members?

Since all works that do not involve or related to crimes are noble, we

therefore charge the Inspector General of Police to call officers and

criminals to stop forthwith.
Continuous harassment of ASTOGRN members by the police would be seen

and treated as working against the Buhari administration's policy on

Local Content and deregulation.
In the same vein, we call on the Minister of State for Petroleum

Resources, Dr. Ibe Kachuwu to call the management of NNPC to order for