My emergence as governor a miracle: Akeredolu 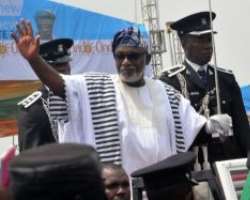 Gov. Rotimi Akeredolu of Ondo State has described his emergence as governor of the state as “a miracle”.

The governor said this at a thanksgiving service held in his honour at the All Saints Church, Jericho, Ibadan, on Sunday.

Akeredolu, the APC candidate, defeated Mr Eyitayo Jegede of the opposition PDP and Dr Olusola Oke of the AD to emerge winner in the November 2016 governorship election in the state.

He said his victory was a manifestation of the peoples trust and love for God.

“I can tell you that our success and victory in the election was a miracle. I contested once and I told the Lord that if I win, I will build a place of worship for you.

“I was not too sure that the victory will come but I said to the Lord that whether win, lose or draw I will build a place of worship for you.

“It is because I have that strong faith in God and we did it. And now that same Lord gave us the victory. So, my people you don't have to wait until he answers your prayers before you do things for God.

“Do it, may be that is where success will come. May be God remembered what we did and that was why he gave us victory, ” he said.

Akeredolu promised to lead a purposeful government in the state, adding that he was indebted to the church because he had found all that he wanted in the church.

According to him, “It was in this church that I became a Senior Advocate of Nigeria, President of Nigeria Bar Association (NBA) and now a governor.”

Earlier, Ven. Godwin Daramola in his sermon, urged the governor to make thanksgiving his lifestyle in order to experience the blessings of God on a daily basis.

“When you acknowledge the blessings of God, he will be committed to preserving all that he has done for you,” he said.

He charged Akeredolu to emulate the exemplary life of Jesus Christ, to strive for integrity and to be wary of sycophants.