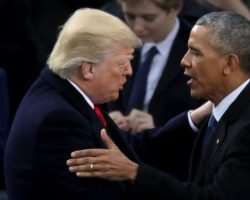 President Donald Trump accused former president Barack Obama of wire tapping his phones in October during the late stages of the presidential election campaign, but offered no evidence to support the allegation.

“How low has President Obama gone to tapp my phones during the very sacred election process. This is Nixon/Watergate. Bad (or sick) guy!,” Trump said on Saturday.

Trump claimed that though the wiretapping took place, there was “nothing found.”

“This is McCarthyism!” the president tweeted.

Trump didn’t offer any evidence to support his bombastic claims. He may have been referring to a Breitbart report  about conservative radio host Mark Levin’s allegations that Obama sought to “undermine” Trump’s campaign in the final days of the presidential election.

Journalists have noted that the wiretaps Trump says he “just found out about” have been reported on for weeks. The FBI reportedly requested a warrant from a FISA court (Foreign Intelligence Surveillance) in October to monitor Trump campaign officials  who were suspected of improper ties to the Russian government.

A senior US intelligence official  told the BBC in January that that warrant had been granted, but that has not been confirmed.

Andrew McCarthy, of the conservative-leaning National Review, noted in January that a FISA court doesn’t need evidence of a crime to grant a warrant, just evidence amounting to probable cause that the target of the wiretap is an agent of a foreign power.

“Those restrictions were put in place to protect citizens from people like you,” Rhodes said on Saturday , in reference to Trump.

Trump’s administration has faced increased scrutiny in recent days over its emerging ties to Russia and amid the US intelligence community’s conclusion that Russia interfered with the 2016 election.

Attorney General Jeff Sessions on Thursday recused himself from Justice Department investigations related to Trump’s presidential campaign after reports revealed that during his confirmation hearings, he did not disclose two meetings he held with Russian Ambassador Sergey Kislyak during the presidential campaign.

(Attorney General Jeff Sessions holds a meeting with the heads of federal law enforcement components at the Department of Justice in Washington.Associated Press/Susan Walsh)

Trump, however, claimed on Saturday that the Obama Administration had set up the meeting between Sessions and Kislyak.

“The first meeting Jeff Sessions had with the Russian Amb was set up by the Obama Administration under education program for 100 Ambs……” Trump tweeted. He also said that Kislyak visited the Obama White House “22 times,” though did not offer any evidence to support the claims.

Trump’s national security adviser, Michael Flynn, resigned in February after revelations that he had discussed US sanctions on Russia with the Russian ambassador to the United States before Trump took office.

Administration officials reportedly  told Costa they expected Saturday to be a “down day, pretty quiet.” Trump’s tweets started around 6 a.m. on Saturday, from the Mar-a-Lago.

Trump also took a shot at Arnold Schwarzenegger, who announced on Friday that he was leaving “The Apprentice,” the show Trump formerly hosted.

“Arnold Schwarzenegger isn’t voluntarily leaving the Apprentice, he was fired by his bad (pathetic) ratings, not by me. Sad end to great show,” Trump claimed.