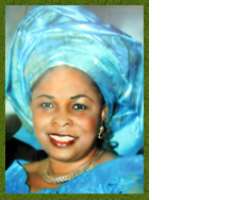 Patience Jonathan
First Lady, Patience Jonathan who left Abuja for Lebanon Thursday, opted to fly to Beirut in a private airline, rejecting the opulence of a presidential jet.

Pointblanknews.com learnt that Mrs. Jonathan is expected to spend two days with some family members and friends residing in Beirut.

Mrs. Jonathan, according to our sources, flew to Beirut en route  Dubai, the UAE capital.

This is the first trip in her private capacity since her husband became the President.

As a way to positively create impacts on the lives of the less privileged, Mrs Jonathan, while serving as the wife of the then Governor Jonathan of Bayelsa State in 2006, set up a non-governmental and non-profit organisation, A. Aruera reachout Foundation (AARF). The vision of the NGO is to empower the disadvantaged and make them self-reliant to actively and meaningfully contribute to national development.

AARF's resolve is to give hope to the hopeless, shelter for the homeless and succour to young people, and nurture them to become self-reliant in relatively deprived neighbourhoods. It exclusively operates for charitable purpose and rekindles hopes in the less-privileged persons. Available records show that over 2,000 women have benefited from the training arm of the NGO so far.

Besides, the NGO has proved itself as veritable in massive literacy programmes, treatment of children with heart diseases and in recording peace in the Niger Delta region. It has been training deprived women and youths in skills acquisition, such as hat making, plantain flour for diabetic patients, bead making, catering as well as tie and dye of fabrics. Apart from that, the NGO has also sponsored and awarded scholarships to numerous orphans, and taken care of a number of old aged persons.

It is on records that AARF is providing training to three orphans at St Mary's Home for Orphans and Destitutes at Gwagwalada, Abuja up to university level; organised soup kitchens where people who have no money can get food and other items free; facilitated the release on bail of 15 prisoners at Ahoada Prison in Rivers State; sponsored people with various medical conditions on overseas treatment in India; and built hostels for orphanages.

Prior to the release of the former Ahoada prisoners, Mrs Jonathan had dispatched a team of four lawyers to the prison with a view to carrying out pro bono services for the inmates. The outcome was the commendable release of the inmates who were mostly indigenes of Bayelsa State. The remote benefit of the action of the wife of the acting president, then, was decongestion of the prison.

Mrs Jonathan, as part of the collective AARF vision, makes frequent celebration with the underprivileged in the society, notably at the Holy Trinity Catholic Church and St Matthew Anglican Church, all in the FCT. Immediately after the burial of her father in-law at Otuoke, Ogbia Local Government Area of Bayelsa State, Mrs Jonathan paid a visit to the Tuberculosis and Leprosy Referral Hospital, Igbogene where she not only encouraged the patients and shared words of love with them, but also presented to the inmates food donated for the burial of Pa Jonathan.

During similar visit to the Federal Medical Centre, Yenagoa, Mrs Jonathan was moved by the loud and painful cry of a woman in labour. She displayed uncommon virtue, suspended all other activities and waited to make sure the woman had safe delivery. Widows in Bayelsa can, today, attest to the kind-heartedness of Mrs Jonathan who had, at various times, donated bags of rice, yam tubers and other food items.

Speaking at a reception to mark her birthday in Abuja not too long ago, Mrs. Jonathan stated, “I am very confident that empowering women will not only help to better the lives of both women and children but will also contribute to achieving all other goals of reducing poverty and hunger, improving maternal health, combating HIV/AIDS, malaria and other diseases. The modern day woman should be given the opportunity to excel politically, socially and economically as well as an enabling environment to enable us contribute our quota to the development of Nigeria”