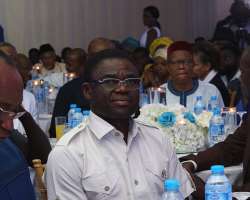 Union Bank, one of Nigeria’s first-generation banks, marked its centenary anniversary dinner with customers in Benin on Tuesday, 22 February, 2017.

The event which held at Protea Hotel, Benin City had dignitaries from the state in attendance.

Speaking with the press during the visit, Mr. Emeka Emuwa emphasized the Bank’s resolution to build on its achievements in order to impact the future.

The evening came to its peak when music legend, Victor Uwaifo performed his tracks including the evergreen hit song 'Joromi'.

Other activities are lined up to continue the celebration in Benin City.

See photos from the event.