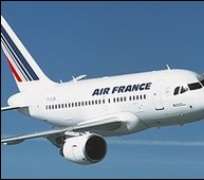 A fall in air traffic, particularly for cargo, rocketing fuel prices and the fatal Rio-Paris air crash of almost a year ago all took their toll.

Its chief executive, Pierre-Henri Gourgeon, said that 2009-10 financial year would go down as the company's “annus horribilis”.

That figure, though, is not strictly comparable as it was made before Air France merged with the Dutch airline KLM in 2004.

This year's figure is almost double the 811m-euro loss reported for the previous financial year.