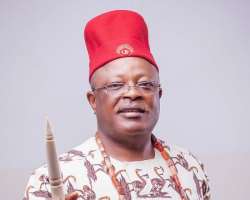 Powerful leaders have the ability to shape history, and a select few have the distinction of truly changing the world. Governor David Nweze Umahi belongs to the latter. The peoples' governor would be remembered as the man who superintended activities that led to the golden era of Ebonyi state. In years to come, his stewardship to Ebonyi state would become a permanent feature of political and ideological discourse. The future generation would be blown away completely by the amazing contribution he made to the rebranding of the salt city.

In definite terms, Ebonyi State has undergone tremen­dous transformation between 2015 and today and more ef­forts and strategies are being deployed by the current dis­pensation under the watch of Governor, David Nweze Umahi to enable the state attain the full development and the scope of potential possible. For those who are familiar with what Abakaliki the state capital was, they will to­day appreciate the fact that not only has the state been mod­ernised but has become a ref­erence point to it citizens and foreigners who stream into the town to explore the "goodies" it has to offer.

Created in 1996 along others like Gombe, Bayelsa, Ekiti, Nasarawa and Zamfara states, from inception, Ebonyi State capital was only a shadow of its old self, a glorified local government headquarter. Visitors often had criticised the infrastructure deficit in the state, whereas other state capitals, created the same time with it had developed much faster in terms of infrastruc­ture development - in both commerce and human capac­ity, with establishments that attracted the interest of inves­tors.

Abakaliki, the ancient, dusty, suffocating, two-road, underdeveloped city that once served as a province during the British colonial era in the old eastern Nigeria has fared better in the last 2 years. The area which once, was derogatorily nicknamed “Dust of the Nation”, has now proudly renamed itself “Salt of the Nation.” It also seem to have buried its ‘dust’ symbol that had hung over its neck like an abbatross as its march to development has changed its destiny. The guinea warm-infested province in the old eastern Nigeria where the inhabitants were seen by their fellow Igbo, and colonists as “second class citizens” has also shorn itself of that stereotype.

The story of Ebonyi cannot be written without Abakaliki and the people of the area who were for very many decades subjected to criminal neglect, notoriously ‘enslaved’ and perceived as ‘inferior ‘species’ by their Igbo neighbours who probably were more fortunate to have been exposed to the western education earlier following the coming of the white man to Igbo land.

Looking at the records and on account of the physical transformation of the state starting from May 29, 2015, Ebonyi cannot be said to have re­mained static any longer; it has indeed progressed. Environmentally speaking, drainages, culverts, round abouts, new roads and most facilities that could enable ease of adminis­trative functions are springing up everyday in quick rapidity.

Under Governor Umahi, Ebonyi State has been ranked the best in agriculture. Abakaliki rice has suddenly become the favourite song on every lip. Ebonyi state has entered into local and international discourse as the rice capital of Nigeria. Abakaliki rice has become the grain of choice. The state, is enjoying the sole right of being called the home of local rice production in Nigeria. Indeed many are familiar with the popular Abakaliki rice which, has once again regain its prominence within the last one year with the intensive agricultural policy of the state government.

The governor, with more of these efforts has continued to create opportunities, which did not stop at partnering with multinationals. Riding on his passion to further enhance de­velopment in the state he has pumped well over N1 billion to empower youths and women of the state in various fields of endeavors, ranging from building, weld­ing, refrigeration, bio med­ics, technicians and electrical works, etc.

If the hands of time could turn then in an­other given time, under the administration of Governor Umahi, there will be little or no difference between Ebonyi State and the Federal Capital Territory in terms of develop­ment, but more so, the achievements of his predecessors would pale into insignificance when compared with the massive development rippling across the state. Gradually, he has joined the pantheon of immortals whose ideas and praxis dominated and influenced their world and would therefore live forever in the hearts of the people.