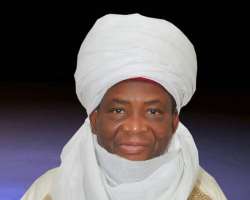 1.1 UMARU NAGWAMATSE
The history of Gidan Wazirin Kontagora must begin with the life and times of UMARU NAGWAMATSE. He was born at Wammako in 1806, the 10th son of Sultan Abubakar Atiku, a grandson of Usman DanFodio and a younger brother to Ahmadu Zaruku (The 5th Sultan of Sokoto). The period of Nagwamatse's birth was during the early stages of Jihad which was launched by his grandfather Usman DanFodio.

Umaru Nagwamatse was a man of inspirational character and determination. As a young man of great ambition and dreams, he left Sokoto in the year 1850 in company of two companions (Tukura Abdu and Muhammadu Dodo). He also took along, a wife and his eldest son. His declared intention of leaving Sokoto was to visit his uncle Mallam Halilu Abdullahi who was then the Emir of Gwandu. On reaching Gwandu he sought and obtained his uncle's permission to proceed south wards of the territory of Gwandu towards Nupeland. He eventually became a man of expedition and moved north-east into a territory outside the borders of Hausa land. In 1859, he was given the title of "Sarkin Sudan" meaning "King of the blacks" conferred on him by his elder brother Ahmadu Zaruku Atiku (5th Sultan of Sokoto) in recognition of his conquests. He founded Kontagora in 1864.

1.2 MUHAMMADU DODO IBN UMARU
Just as the history of Gidan Wazirin Kontagora began with the founder of Kontagora Umaru Nagwamatse, so must it anchor on his comopanion Muhammadu Dodo. Right from the day they set out from Sokoto in the spirit of camaraderie, Muhammadu Dodo had maintained the treasurable integrity of unflinching loyalty to Nagwamatse, voyaging with him in all his travails and triumphs. Thus Muhammadu Dodo Ibn Umaru, who himself is a man of remarkable ability, ardour and candour established a reputation of dependable integrity which up to contemporary times is the pride and hallmark of his family lineage. Dodo's pedigree of loyalty to the Gwamatsawa dynasty has become a family tradition spanning over 150 years.

In recognition of Muhammadu Dodo's loyalty and leadership acumen deployed in the supportive service to the Sarkin Sudan of Kontagora, he was honoured and turbaned with the title and portfolio of Tukuran Kontagora after the demise of Abdu Dan Magaji (who was his predecessor in title). In the capacity of the Tukura; Dodo exercised defined administrative authority and discharged prominent roles and responsibility within the parameters of the jurisdiction of the Sarkin Sudan.

1.3 ALLEGIANCE PERSONIFIED IN TUKURA DODO
This brief historical account presents the opportunity to sport light the personification of Muhammadu Dodo as a trusted loyalist of the Gwamatsawa dynasty. One remarkable deed of valour and trustworthiness which he demonstrated and which has remained indelible in the annals of Kontagora history exemplifies his dependability as Tukura. In 1901, while still holding the Tukura title, Ibrahim Nagwamatse (protégé of Umaru Nagwamatse) who succeeded his brother Abubakar Modibbo as Sarkin Sudan in the year 1880 was captured by the British at Kaya (presently in Kaduna State) and taken to Lokoja (present headquarters of Kogi State) and held there in captivity. Promptly discharging his responsibility as Tukura, Muhammado Dodo went round to lobby his colleagues the other title holders to pay homage to Sarkin Sudan (Ibrahim Nagwamatse) where he was held in captivity by the British but the rest of the title holders refused. Unswerving and unwavering Tukura Dodo courageously braced all odds see the detained Emir. When he met the Sarkin Sudan; the Emir gave him three instructions:

That Tukura Dodo should take his family and the rest of the people back to Kontagora.

That under no circumstance should Tukura allow a new Sarkin Sudan be appointed. The Emir expressed hope that he will come back to Kontagora where he wishes to be interred after death.

That the Tukura is to be in charge of the town until the Emir returns.

Furthermore, the Emir Ibrahim Nagwamatse instructed the British officers to issue a letter to their colleagues in Kontagora to that effect and that should they need any assistance, they should contact Tukura Dodo.

Faithfully implementing the Emirs instruction, Tukura Dodo returned to Kontagora with the family of the Emir and the people entrusted to him. In the intrigues, some of the title holders defected and followed some of the Princes to Sokoto hoping that a new Sarkin Sudan be appointed amongst the Princes to replace the detained Emir. This never happened and they later returned to Kontagora.

Sarkin Sudan Ibrahim Nagwamatse was eventually released from the British colonialist headquarters in Lokoja and he returned to Kontagora shortly before he entered Kontagora town; he enquired about Tukura and was informed that Tukura Dodo himself had been arrested and detained by the British Authority. The Emir immediately diverted and went to Usubu to seek for Tukura’s release. Upon the Emir's intervention, Tukura Dodo was released by the British Colonist. After long and meritorious service to the Gwamatsawa dynasty Tukura Muhammadu Dodo Ibn Umaru died in the year 1904.

1.4 INSTITUTION OF THE WAZIRI
On the death of Tukura Dodo, two conflicting interest emerged both seeking to fulfil the vacuum created by the demise of Tukura Dodo. Firstly, Ibrahim Dan' Inna, a brother to Muhammadu Dodo sought to succeed his brother. Secondly, Tukura Gago son of Abdu Dan-Magaji who held the Tukura title preceding Muhammadu Dogo also sought to be turbanned as the next Tukura on the ground that the title was his fathers. In settling the conflict of interest, the Sarkin Sudan Ibrahim Nagwamatse decided to give the title of Tukura to Gago son of Abdu Dan-Magaji. On the other hand, he installed Ibrahim Dan'Inna as the Waziri of Kontagora.

Ibrahim Dan'Inna, a younger brother to Muhammadu Dodo held the Waziri title until his death in 1920. He was the Waziri for six years thus began the Wazirin Kontagora title instituted in 1914. Some of Ibrahim Dan'Inna's decendants are still living in Sokoto.

1.5 THE ROLE AND PLACE OF THE WAZIRIN IN THE EMIRATE COUNCIL

The Waziri exercises the role of the Emir's lead adviser including legal counsel to the Emir. He ensures that taxes and tributes are paid as at when due. The Waziri is a highly exalted title in the administration of Emirates in Northern Nigeria, Only men of unflinching loyalty to the Emir as exemplified by Muhammadu Dodo hold the office of WAZIRI.

He is a kingmaker and member of the Emirate Council in the new dispensation.

1.6 CHRONICLE OF WAZIRI TITLE HOLDERS IN KONTAGORA EMIRATE FROM 1914 - DATE

Waziri Usman - (1962 - 1985). He was also the first Turakin Kontagora, served as Councilor in the Emirate Council, was a member of House of Representatives and a Senator of the Federal Republic of Nigeria. He was Waziri for 23 year

Waziri Alhassan Usman - (1995 - 1999). Nephew to Waziri Aliyu and Second Child of Waziri Usman. He was the Director Finance and Administration, Federal Ministry of Industry. He was Waziri for 4 years

Waziri Yusuf II - (1999 - Date). A younger brother to Waziri Alhassan, a nephew to Waziri Aliyu, a son to Waziri Usman and a great grandson of Tukura Muhammadu Dodo.