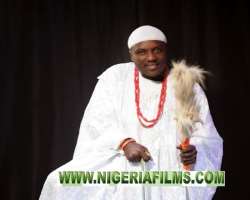 If the words of Olabisi Okunola nee Yusuf, the new wife of Fuji musician, Saheed Osupa is anything to go by, then the fans and admirers of the singer especially females should be informed that the man will not take a third wife. In a recent chat with City people magazine, Olabisi stated emphatically that Osupa will not take a second wife after her.

When asked, Being a super star, don't you think your husband will marry another wife after you? she said "He has no time for women. He is preoccupied with his music.

But if he has time for you as a second wife, he can also create that time for another wife?
"Just take it from me that he will not marry again"

What gave you that assurance?
I am his wife, I know better.That is why I'm telling you that he is not marrying another wife after me.

On her relationship with Osupa's 1st wife?
Olabisi said"It is very cordial and we have being living together in our husband's house at Ibadan.