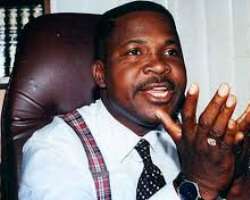 14th February, 2017
Mr. Ag. President,
Federal Republic of Nigeria
Abuja.
Your Excellency,
The Edo Unity League is an intelligentsia group objectively committed to the propagation of sound ethical, moral and empirical values for the well being of distinguished Edo professionals and artisans within the Comity of Nigeria's ethnic nationalities. Records abound as to activities, such as symposia, press conferences, workshops and other fora, where we have canvassed the unity of Nigeria, with the caveat that justice, equity and fair play must be an irreducible minimum.

Since assumption of office of your acting Presidency, you have left no one in doubt as to your determination to rid our dear country of every trait of corruption. What is in doubt however, is the seeming vindictive tendencies of the operators of the anti-corruption apparatus, especially the EFCC and the DSS. This has caused many Nigerians nightmares.

It is no news that Nigerians rebelled against the midnight raid of judges in Abuja and Rivers State under the thin guise of 'sting operation'. The near unending battle of wit between EFCC and Gov. Ayo Fayose has since attained debasing dimension. Like most Nigerians, the Edo Unity League sees the freezing of Mike Ozekhome's Chambers’ account as an unmistakable and glaring case of vendetta and witch hunt because of the well known fact that the learned Senior Advocate of Nigeria is handling numerous cases for the Ekiti State Governor against the EFCC since the inception of the latter's travails with the anti-corruption agency.

The said sum of N75 million was legitimately and legally transferred to Mike Ozekhome’s Chambers account from the same account from which Governor Fayose also withdrew N5 million on the same date, after the account had been defrozen and made operational by an order of the Federal High Court, Ado Ekiti, presided over by Justice Taiwo O. Taiwo. In appreciation of the volatile mood of the nation, we have resolved to restrain our members and other concerned Niger Deltans from street protests or processions, which could inflame the already tensed religious, ethnic and political divides in our country. We hope our resort to peaceful expression of our angst through this open letter to Your Excellency will not be interpreted as a tacit approval of the apparent vindictiveness of our esteemed son and brother, who has defeated the EFCC over five times in court as Attorney on behalf of his clients, in the last one year, with the latest case being in January, wherein the agency was indicted and ordered to pay the sum of N6 million only, as damages for its illegal arrest and detention of one Barrister Sylvanus Okpetu. He has also fought against other tendencies deemed antithetical to law and order.

Your Excellency sir, we fear that if the EFCC looses its focus and the confidence of generality of Nigerians, as it is sure headed, it will be fatal to our collective aspiration for a corrupt free society. We urge you to urgently call the agency to order as the patience of Nigerians over its seeming 'Lord and Master unto thyself' status is getting unbearable. Our humble prayer is that you prevail on the leadership of EFCC to immediately defreeze Mike Ozekhome’s Chambers’ attached and frozen account.

Sir, a stitch in time, saves nine!!!
Please, sir, accept the assurances of our highest regards.