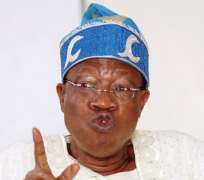 This is not the time for preaching peace when the enemy is ready to destroy the world. To forgive Islamic terrorists is up to God but to send them to see God is my duty" - President Vladimer Putin.

Is there any sane person that disagrees with Putin? Evidently there are a few people in high places in Nigeria that do.

The greatest evil that plagues our land today are not Boko Haram or the Fulani miliitias. The greatest evil are those so-called moderate Muslims and practising Christians who pretend that the terrorists don't exist, who turn a blind eye to their evil and who sit back silently and watch them.

The other day he claimed that the assertion that Muslims kill Christians in Nigeria "is a fallacy". This man is nothing but scum. He is filth. He is sick. He is an unrepentant and pernicious liar.

He is the lowest of the low and every day I pray that God punishes him for his callous heartlessness and continuos support for the terrorists.

It was the same lying Lie Mohammed that complained that it was wrong for the Jonathan government to have banned Boko Haram in 2013 when he was spokesman of the defunct ACN.

As a matter of fact I am reliably informed that it was that statement that endeared him to Buhari's heart. Buhari himself went on to say in that same year that "an attack on Boko Haram is an attack on the north".

12 years before then, in 2001, he had said that it is his belief that sharia law should be spread to every part of the nation, that he did not see why Christians should complain about sharia law because it was "Muslim hands and arms that are being chopped off" for theft and that Muslims should vote for only muslims.

In view of this it is no wonder that so many Christians are being butchered, harrassed, intimidated, arrested, insulted and threatened under his watch and that his Minister of Information has so much disdain and contempt for Christians.

As Minister of Information lying Lie Mohammed has NEVER condemned the Fulani militias that are slaughtering Christians all over the north. He has never condemned those that slaughtered thousands of innocent and defenceless Christian men, women and children in Southern Kaduna, Agatu, Taraba, Plateau, Enugu, Abia, Ondo, Ekiti, Delta, Benue and elsewhere by the Fulani militias.

He has NEVER shown any remorse or offered any explanation or apology for the Federal Government's inability to protect or defend Christians from the terrorists and those who kill them and occupy their land.

He has NEVER called for their arrest, he has NEVER consoled or visited the families or the communities that were attacked and ravaged and he has NEVER acknowledged that the Fulani militias are the greatest, most connected, most protected and most powerful terrorist organisation in Nigeria today.

The blood of ALL those Christians that have been butchered in the north over the last one year and seven months will haunt lying Lie until the day he dies.

He is evil. He is wicked. He is irresponsible and his lie that no Muslim has killed Christians in Nigeria will follow him into eternity.