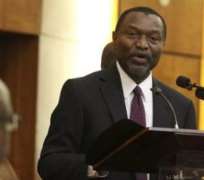 The federal government has outlined plans to pull the country out of recession and get it on a path of sustainable growth in the shortest possible time.

According to the federal government, the medium term plan is expected to drive Nigeria to a minimum GDP growth rate of 7 per cent within the planned period.

The minister of Budget and National Planning,Senator Udoma Udo Udoma disclosed this yesterday at the government/private sector engagement forum on Nigeria’s economic recovery and growth plan at Aso Villa, Abuja.

He also stated that the plan is aimed at having an economy with low inflation, stable exchange rates and a diversified and inclusive growth.

According to him, while the plan is designed to be national in nature, the government had received inputs from all segments of society and from the sub-national governments.

Noting that the time frame for the plan is 2017-2020, Udoma explained that some of the 34 key actions selected for immediate implementation were already yielding results, especially the reforms in agriculture and solid minerals.

He said the federal government would focus on tackling constraints to growth, noting that, while Nigeria’s growth faces various supply constraints, including fuel, power, foreign exchange and even business unfriendly regulation, the said plan focuses on overcoming and resolving these input challenges.

The minister also pointed out that the federal government would leverage on the power of the private sector, as economic recovery and transformative growth cannot be achieved by the government alone.

He said: ‘‘In promoting national cohesion and social inclusion, the ultimate beneficiary of more inclusive growth is the average Nigerian man and woman. We recognise the power of markets to drive optimal behaviour among market participants. The plan to prioritise the use of the market as a means of resources allocation where possible and support a more business friendly economic environment.

‘‘The economic recovery and growth plan is rooted in the core values that define the Nigerian society and are enshrined in the 1999 Constitution, notably discipline, integrity, dignity of labour, social justice, religious tolerance, self-reliance and patriotism.’’

The minister further listed the immediate execution priorities of the recovery plan to include agriculture and food security, energy (power and petroleum), small business and industrialisation, as well as stabilising macroeconomic environment.

‘‘There will be a major emphasis on implementation, monitoring and evaluation of this plan and plans to set up a specially staffed delivery unit to drive implementation of the NERG plan,” Udoma added