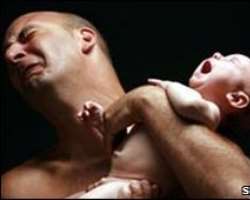 Caring for a newborn can be stressful
Many new fathers experience post-natal depression, yet most cases go undetected and untreated, experts warn.

One in 10 new fathers may have the baby blues, US researchers believe – based on their trawl of medical literature.

While this rate is lower than in new mothers, it is more than currently recognised, they told the Journal of the American Medical Association.

Lack of sleep and new responsibilities, or supporting a wife with post-natal depression can be triggers, they say.

The Eastern Virginia Medical School team based their findings on 43 studies involving 28,004 parents from 16 different countries including the UK and the US. We don't always remember that this is going to be an issue for men as well as for women

They found new fathers were generally happiest in the early weeks after the birth of their baby, with depression kicking in after three to six months.

And depression appeared to be shared – men were far more likely to be depressed if their partner also had post-natal depression.

Dr James Paulson and Sharnail Bazemore, who carried out the study, said more efforts should be made to improve screening and referral of at-risk fathers, particularly as mounting evidence suggests that early paternal depression may have substantial emotional, behavioural and developmental effects on children.

“Depression in one parent should prompt clinical attention to the other.

“Likewise, prevention and intervention efforts for depression in parents might be focused on the couple and family rather than the individual,” they said.

Paternal pressures
Bridget O'Connell, from the mental health charity Mind, said: “Becoming a parent is one of the biggest changes that both men and women can go through, yet there is still very little understood about how it impacts on mental health, and how many people will experience a perinatal mental health problem.

“New parents can be faced with sleep deprivation, changes in lifestyle, changes in their relationship and new responsibilities all at once, and we don't always remember that this is going to be an issue for men as well as for women.”

But Ellie Lee, a lecturer in social policy at Kent University, said it was important not to medicalise normal emotions.

“It is, of course, essential to diagnose and treat serious clinical depression. But there is a tendency to overuse medical labels.

“What is interesting is that saying men have post-natal depression severs the link with biology. Men have not been pregnant, had the hormonal surges or given birth.”

She said modern men were put under other strains.
“It is no longer good enough to just be the bread-winner. They have to be engaged and involved. They are expected to abstain from alcohol, attend every scan and 'feel the pain' of birth.

“This can be a stressful experience.”