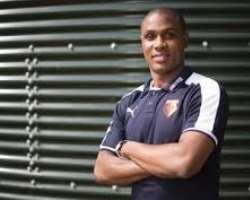 After managing to score just three goals this season and tumbling in the striking position's pecking order at Watford, the English Premier League club was left no other choice than to ship Odion Ighalo to a Chinese Super League side-Chongchun Yatai. With Super Eagles Captain, Mikel Obi, now playing in the same  league after failing to make the team at Chelsea and Nigeria's female football sensation, Asisat Oshoala, also likely to head  for China after the expiration of her contract with Arsenal at the end of the season.

Odion Ighalo will become English football's latest concession to the Great 'Wad' of China after Watford agreed a £20 million deal with Chongchun Yatai. The misfiring striker is set to follow his international teammate, John Obi Mikel, and hop aboard the Chinese Super League gravy train.

'I am not surprised Odion Ighalo is doing what he is doing. I have chatted with him and played with him in the national team and I can see the talent he has, as even before I have the ball in those games, he is already making his run. He is a player who likes to exploit the space behind the defence and is a good finisher around the box,' Mikel had said of Ighalo after Chelsea's 2-2 draw with Watford in 2015/16 Premier league season.

But all those abilities seem to be beyond Ighalo now as he seems to have lost his goal-scoring form Ighalo has gone from top scorer at Vicarage Road, and magician behind the 'Iggy chop' party trick, which left countless defenders on their backsides to a spare part in danger of missing out on a Premier League squad number.

Watford head coach Walter Mazzarri admitted Ighalo's departure was imminent on Monday night, saying: 'Every morning I ask the club what the situation is, and negotiations are now at an advanced stage, so it should only be a matter of a couple of days.'

Ighalo was top scorer across all four divisions in 2015, when his 30 goals fired the Hornets to promotion and Premier League safety.

Even when the goals dried up for him in the second half of last season, Shanghai SIPD made a mind-blowing £37.5m bid for Ighalo last summer which the player rejected.

His market value has however plummeted as he finished 2016 with just six goals in all competitions, and Watford's top brass agree a fresh start is the best solution for all parties.

Another Chinese club, Shanghai Shenhua, were exploring the possibility of pairing Ighalo with Carlos Tevez, but they would not meet Watford's £27m asking price for a player their rivals SIPD had valued £10m higher only six months ago.

Ighalo, who appeared to be waving goodbye to travelling fans after the 2-2 draw at Bournemouth was left out of the squad altogether for the embarrassing FA Cup defeat at Millwall on Sunday.

Speaking in Lagos, former Manchester United striker, Louis Saha, noted that the Chinese League would never be a threat to European leagues in spite of the ridiculous amount it is using to lure players to China.

'I don't see the Chinese Super League as a threat to the European big leagues. Leaving the top league in Europe for China is just a matter of choice. Moreover, aside from very few players, a number of players that are leaving Europe for China are those that cannot really command regular jersey in their clubs,' Saha said.

Corroborating Saha's stand on the Chinese League is Bayern Munich winger, Arjen Robben, who recently rejected an offer of a move to the Chinese Super League after he agreed to sign a one-year contract extension but admitted he had the opportunity to cash in on a big-money offer to move to China.

'A transfer to China would be something else entirely. That is basically acknowledging your career is over. I want to keep playing at the highest level as long as possible,' Robben said.

'I do not understand players going to China at the age of 27 or 28. Those guys are at the peak of their career. That is a waste really. You only get one career. I sort of understand players who are already in their 30s.nIt is all about a certain madness that is ongoing in China right now. They are offering some crazy figures. I also got some offers.

The money on show is so crazy that you at least have to consider it. They are offering maybe four, five or six times the amounts you get at a big club. But money has never driven me. That is why I have had such a great career. It is about football for me,' he added.

It would be recalled that some Nigerian players like Yakubu Aiyegbeni, Obafemi Martins, Victor Agali, Garba Lawal and Anthony Ujah moved to China after a dwindling career in Europe.

As a boy, Ighalo and his Olodi Warriors team-mates would hit the deck when they heard gun fire during training.  The bullets didn't know the difference between the young footballers and the drug dealers selling their narcotics on a corner of the pitch, which the police were targeting. Growing up in the Ajegunle ghetto, at the heart of Lagos, life can be like that.

The pitch where he trained and played as a child is called the 'Maracana' by locals, in the Tolu Area of the community. It is one of the most popular places in Ajegunle and has become known as the place that turns filth into gold.

Some houses are even built on top of great mounds. But out of its depths have emerged footballers who would go on to make waves in Europe. Ighalo is one of them.

His mother, Martina, worked day and night selling water and soft drinks to save up for his first pair of boots against  his father, Paul's wish, who wanted his son to go to school and study, so his parents would argue. Ighalo however chose a pair of adidas Copa Mundials, displaying a touch of class, even back then.

Goalscoring was his primary function as his 28 league strikes in 2015 were more than anyone in English football's top four divisions. In the top five European leagues, he was just behind Cristiano Ronaldo (35), Lionel Messi (33), Pierre-Emerick Aubameyang (29) and alongside Luis Suarez in joint-fourth.

Ighalo was born on June 16, 1989 in Lagos. He played for Prime FC of Oshogbo and Julius Berger of Lagos from where he was discovered by FIFA agent, Marcelo Houseman, who recommended him to Atta Aneke, and was subsequently taken on trial by Norway's Lyn Football.

On July 30, 2008 Ighalo signed for Udinese in Italy and agreed to a five-year contract. He was later loaned to Granada FC in the 2009 summer, as part of the partnership agreement between Udinese and the Spaniards. He scored 17 times in his first year and five in the second, as both seasons ended in promotion; this was interspersed with a brief loan stint back in Italy with A.C. Cesena. - Thisday.