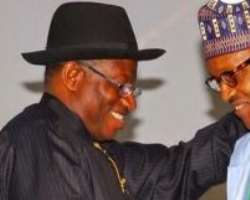 Former President, Goodluck Jonathan has advised President Muhammadu Buhari to urgently implement the resolutions of the 2014 National Conference to  prevent further ethnic and religious tensions that lead to avoidable crises in the country.

Jonathan  spoke on the challenges facing Christians in Nigeria, and the Niger Delta issue when he met with the US Congress House Sub-Committee on Africa.

For him, the resolutions of the conference would go a long way towards deflating crisis in the country.

Ikechukwu Eze,  media adviser to the former president,  said Jonathan spoke  in his capacity as the Chairman of the Goodluck Jonathan Foundation.

“The former President, who was invited by the US Congress sub committee, and spoke in his capacity as the Chairman of the Goodluck Jonathan Foundation, said that implementation of the resolutions of the 2014 National Conference is the panacea that will prevent ethnic and religious tensions that lead to crises such as the recent Southern Kaduna killings.

“He also identified impunity as a factor that contributes to there occurrence of such violence, noting that if those behind previousviolence were not prosecuted then like minded individuals and groups would be emboldened to repeat the same act,” it read in part.

Jonathan also talked about his efforts to end impunity, specifically citing the case of Kabiru Sokoto, the mastermind of the Christmas Day bombing of Saint Theresa's Catholic Church in Madalla, Niger State, who was arrested, prosecuted, convicted and imprisoned by his administration, and was the first successful prosecution of a terrorist attack on a place of worship in Nigeria's history.

“That promise was fulfilled on the 20th of December 2013 when Kabiru Umar, aka Kabiru Sokoto, was sentenced to life imprisonment, after my administration investigated that crime, identified him as the mastermind, arrested him and diligently prosecuted him and some of his associates,” Jonathan said.

The former President also noted that his administration's prosecution of the perpetrators of the deadly bombing of an office of the Independent National Electoral Commission (INEC) also in Madalla on April 8, 2011 was the first successful prosecution of terrorists in Nigeria.

While supporting the 2014 National Conference's recommendation for an independent Religious Equity Commission to be set up to apprehend and arrest perpetrators of ethnic and religious violence, Jonathan maintained that ending impunity will also mean ending these tensions.

On the Niger Delta, the former President said he fully aligned with the views of the 2014 National Conference, which called for True and Fiscal Federalism as the way out of agitations in the region and inother parts of Nigeria.

He also said that interventionist agencies like the Niger Delta Development Commission tend not to be effective due to overpoliticization.

The former President opined that the almost overnight development of a state like Akwa-Ibom proved that what the region needed was resource control not interventionist agencies.

The meeting was attended by Chairman of the U.S. House Sub-Committee on Africa, Global Health, Global Human Rights and International Organisations, Congressman, Christopher H Smith, and other influential staff of the Committee.

This, the statement said, was part of efforts of the Goodluck Jonathan Foundation to fulfill its mission to promote peace and prosperity in Nigeria and Africa.