We have been in darkness since the invention of electricity: AbiaMonarch cries out 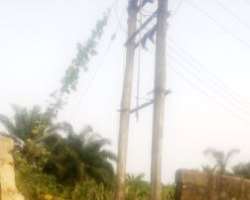 If there is any adjective to describe the situation of a certain Amankwu Osokwa community in Abia State it will be a deplorable pathetic state of injustice.

How on earth can a community in present day Nigeria be existing with no access to electricity. Where then are the dividends of democractically elected politicians whether at the federal, state or local level if government?

This is the reason why the traditional ruler of this community wrote this heart wrenching letter to the House of Rep Member Hon. Solomon Ezinwa O. Adaelu informing him of how his people have never had access to electricity since the invention.

This situation was elucidated by the Monarch HRH Eze Geoffrey Ngozi Peter, who told our reporter that his people have been left in darkness and perpetual underdevelopment even as social and economic activities are reliant on power. According to him, Since time immemorial we have never had electricity in our community and we are in Nigeria under a federal, state and local government.

The Monarch also confirmed that since other neighbouring communities around Osokwa have been enjoying electricity the indecent members of this rural community resorted to voluntary contributions to embark on repair of the badly vandalised 40KVA Transformer. That effort was subsequently ineffective as the infrastructure was compromised by criminal elements about two years ago.

Further investigations revealed that the same elements have now been arrested under the new security architecture set up by the Commissioner of police under the directive of Gov. Okezie Ikpeazu of Abia state, and thus has brought relative calm to the community and neighbouring communities as well.

The Monarch therefore pleaded through a letter to the Honourable representing Obingwa/Osisioma/Ugbunagbo Federal Constituency Hon. Solomon Adele to urgently intervene in the situation.

Noting that the federal lawmaker will continue to enjoy the support of his people owing to his numerous projects one of which is the donation of sets of road reactors to each of the three local governments under his constituency for the rehabilitation of the badly deplorable roads which have been neglected over the years by successive governments.

He also called on the state governor to also look into expediting the construction of roads which several parts of Abia state have been enjoying in recent times.

According to him "we are been neglected and in fact marginalised no federal government presence in health, education, youth employment/empowerment, and these things are the cause of restiveness amongst the youth but we hope that if something is done urgently to restore electricity to our community economic and social activities will thrive and the rural economy will become vibrant again for us, we have palm oil mills in almost every compound, this can generate income for our people, we have youth who are into barking and salon businesses that depend on light and with the biting hardship how many of them can sustain the use of fuel. We also have women and children who also daily depend on water too, welders and artisans, " he said.