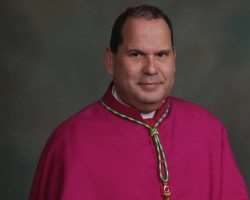 A man has been charged with assault after he allegedly punched  an auxiliary bishop during mass at a New Jersey cathedral in an incident that was caught on video.

In the video, Miller can be seen strolling up the altar and slugging Rev. Manuel A. Cruz, the auxiliary bishop of the Archdiocese of Newark, officials said.

Police quickly tackled Miller and took him into custody.

Cruz was reportedly taken to the hospital for his injuries but they were not serious.

James Goodness, spokesman for the Archdiocese of Newark, was saddened by the ordeal.

“We are thankful that law enforcement officers were able to apprehend the assailant,” Goodness said. “This is not something that we expect to happen in any of our churches.”

The Saturday event was in honor of Clemente, the Baseball Hall of Famer, who died in a 1972 plane crash as he traveled to Nicaragua to personally deliver humanitarian help to earthquake victims.