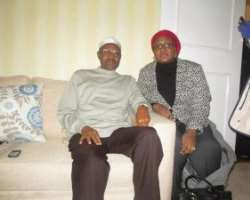 As Nigerians remain skeptical despite a slew of evidences being forward by the Presidency to affirm that President Muhammadu Buhari is well and alife, another picture showing the president with wife Aishat  has come online.

The picture shows Buhari and his wife  in the UK in latest proof of life.

The second evidence were series of pictures of the President meeting with some government officials which was released some days back.

The All Progressive Congress (APC’s) UK Twitter handle has tweeted the photos, somewhat confirming the authenticity of the pictures.