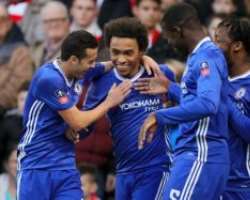 Branislav Ivanovic celebrated what may well be a farewell goal in Chelsea’s comfortable 4-0 home win over Brentford to help his side through to the FA Cup fifth round.

The 32-year-old has been heavily linked with a move to Zenit, which would bring to an end his nine-year stint at Stamford Bridge, but he netted the third on Saturday to offer a timely reminder of his quality.

Brazil international Willian opened the scoring with a curling free-kick early on as the Premier League leaders underlined the gulf in class against their second-tier visitors.

Pedro doubled the Blues’ advantage with a cool finish midway through the first half, with Brentford digging in to avoid further first-half punishment.

Willian celebrates putting Chelsea ahead
Despite showing a much higher tempo and more attacking intent after the break, Dean Smith’s side could not seriously trouble a Chelsea line-up showing nine changes from the weekend win over Hull City.

And the match was ended as a contest when substitute Ivanovic drilled in the third, before winning the penalty from which Michy Batshuayi completed the scoring, keeping Chelsea on course for an eighth FA Cup crown following a 10th consecutive home win.

Chelsea took the lead in the 14th minute when Pedro won a free-kick on the edge of the box and Willian, off a short run-up, bent it home from 20 yards.

John Terry, sent off in the 4-1 win over Peterborough United in the previous round, sent a scuffed shot wide soon after, with Chelsea enjoying plenty of the ball.

They made that possession count when Pedro, who netted twice in that third-round triumph, finished through Daniel Bentley’s legs from Batshuayi’s defence-splitting pass.

It could have got worse for the Bees before the interval, but Batshuayi’s scrambled close-range effort was kept out on the line by a recovering Bentley, who also produced a superb save to deny Ruben Loftus-Cheek.

Brentford – who earned a replay against their illustrious neighbours when they met in 2013 – emerged for the second half with renewed vigour and Lasse Vibe should have done better when the ball fell for him six yards out, with Asmir Begovic smothering at the Dane’s feet.

Yet it was still Antonio Conte’s men who carried the greater threat and only the crossbar denied Loftus-Cheek as he attempted to lift an angled shot over Bentley.

Begovic was called into action just past the hour mark to thwart Nico Yennaris, before Smith sent on star striker Scott Hogan for the final 25 minutes, the Bees’ top scorer having been left on the bench amid reported interest from West Ham.

But it was Ivanovic who made the impact off the bench as he drilled low into the net from inside the box following some excellent link-up play with Kurt Zouma and Pedro.

The Serbia international was then fouled in the box by Yoann Barbet and Batshuayi made no mistake from the spot to wrap up a convincing triumph.

Key Opta stats:
– Willian has scored in three of his last four FA Cup games (three goals), with all goals coming at Stamford Bridge. – Since the start of last season, Willian has scored seven free-kick goals in all competitions – more than any other Premier League player. – Pedro has equalled his goal tally for Chelsea from last season (8 in 40 games) after just 24 appearances this season. – Michy Batshuayi has been involved in six goals in three starts at Stamford Bridge for Chelsea (four goals, two assists).