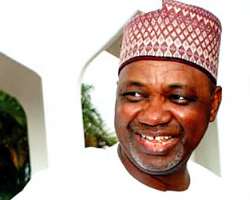 His confirmation, however, did not sail smooth in the House of Representatives as it was nearly marred by members' protests.

The protests, which stalled proceedings for about 45 minutes, was caused by a disagreement over the procedure that should be adopted for the confirmation of Sambo, who until Tuesday, was the Governor of Kaduna State.

Under Section 146 (3)(c) of the 1999 Constitution, each arm of the National Assembly is mandated to approve a nominee for the office of the vice-president.

However, the constitution does not spell out the procedure to be adopted for the approval of the candidate.

The Standing Orders of the House also do not make a provision for how a vice-presidential nominee can be endorsed.

Faced with the confusion of how to approach the matter, lawmakers were divided.

Some wanted the nomination to be debated by all the 360 members before endorsing it, while others opposed the suggestion.

There was also a disagreement over whether a simple voice vote should be used to approve the nomination or lawmakers should vote electronically by using their data cards.

In the ensuring confusion, the Speaker of the House, Mr. Dimeji Bankole, made efforts without success, to restore order for several minutes.

The majority of members mounted pressure on Bankole to simply 'put the question' to a voice vote, but the speaker continued to delay, saying that he wanted to consult widely by calling on lawmakers to air their views.

This position forced those who were against debating the nomination of Sambo to start singing, 'All we are saying, give us Sambo.'

They sang and raised their hands in the direction of Bankole.

The speaker appealed that his deputy, Alhaji Usman Nafada, should be allowed to say something, but he was shouted down.

Though Nafada stood and spoke in support of the nomination, his comments were drowned by the protesters who said that the House was unduly prolonging what should have been a simple endorsement.

The Minority Leader of the House, Alhaji Mohammed Ndume, was given the opportunity to speak.

Ndume endorsed Sambos' choice, noting that he had met all constitutional requirements to be nominated as the vice-president.

But another member, Alhaji Ubale Kiru, opposed the nomination.

Kiru cited a curious House Order 8(2)(ii) and called on the members to defer the approval of the nomination to another day.

He claimed that members should be given time to consult on the nomination, which according to him is only a communication from the President. Kiru, was however, overruled.

As pressure mounted on him to stop further debate on the matter, Bankole yielded and called a voice vote.

There was an overwhelming response of 'ayes', signifying that the majority had approved Sambo' nomination.

Commenting on the rowdiness, the Minority Whip, Mr. Femi Gbajabiamila, blamed it on inexperience and exuberance.

According to him, many lawmakers were excited over the fact that this was the first time they would be required to approve a candidate for an office as high as that of the vice-president.

Sambo was confirmed by the Senate after two separate closed door meetings of its Principal Officers and the plenary, which lasted for about an hour.

The process began with the reading of the letter of request from Jonathan for the approval of the former governor as his deputy.

Deputy President of the Senate, Chief Ike Ekweremadu, led the debate for the approval of Sambo in line with section 146 (3) of the 1999 Constitution.

He said it was historic to undertake the process of approving the nomination of the vice- president, being the first time it was happening in the present dispensation.

According to him, Sambo remained an accomplished professional and a bridge builder well known to members of the Senate.

'We believe that he should be vice-president and I urged my colleagues to support this nomination,' he said.

As soon as he finished, members chorused, 'put the question,' to which the President of the Senate, David Mark, heeded and the request was approved by a voice vote.

A constitutional point of order in reference to Section 146(3) was raised by Senator Ayogu Eze, faulting the use of the word 'confirmation' by Mark while putting the question for approval.

But he was ruled out of order by Mark.
The Senate had to return to session after officially adjourning plenary to approve the votes and proceedings to give immediate effect to its approval.

Eze, who is the Chairman of the Senate Committee on Information and Media, told journalists after the session that the closed door meetings were used to reach conclusions and agreement on the nominee.

He also noted that the normal procedure was to take the reading of the memo and then fix another legislative day to consider the President's request.

'The decision to take the request today (Tuesday) was taken 2am last night (Monday) following the President's plea to the leadership of the Senate to do so today (Tuesday).'

Meanwhile, Sambo who will be sworn in on Wednesday (today) started performing semi-official functions in the Presidential Villa on Tuesday when he joined Jonathan to welcome visiting Sierra Leonean President Ernest Bai Koroma.

Koroma, who was on a condolence and solidarity visit to Jonathan arrived in the Villa, Abuja in company with governors Gabriel Suswan (Benue); Aliyu Wamakko (Sokoto); Isa Yuguda (Bauchi); Segun Oni (Ekiti); and Usman Dankingari (Kebbi).

Sambo was also at the head of the reception line that received the visiting President. Next in line to the vice-president-designate was the Chief of Staff to the President, Chief Mike Oghiadomhe.

While introducing the Nigerian officials at the event, Jonathan pointed at Sambo and told Koroma, 'He is going to be our vice-president; he has just been cleared by the National Assembly'.

Immediately after the reception, journalists approached Sambo to get his comments, but he calmly said, 'I will talk to you tomorrow (today).'

Already, preparations are in place for his first official trip in his new position as he is expected to visit Kaduna State to witness the swearing-in of the state's deputy governor, Mr. Patrick Yakowa, as governor.