I am not a member of APC: Prof Soludo 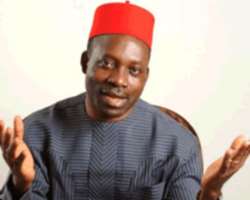 Former Central Bank of Nigeria, CBN, Governor, Professor Chukwuma Soludo, has distanced himself from the list released by All Progressives Congress Chairman in Anambra State which had him as among those jostling for the  party’s governorship ticket.

The state chairman of  APC in Anambra State, Mr Emeka Ibe,  had listed him among those contesting for the party's nomination for the Anambra governorship election.

But Soludo was categorical that he is not a member of APC.

He said, “I have received hundreds of calls, texts and emails seeking clarification on the matter. I also sought and obtained the phone number of the said state chairman and spoke to him in order to ascertain the veracity of the story.

“I wish to clarify that I am not a member of the All Progressives Congress (APC) and could, therefore, not be contesting for its party nomination.”