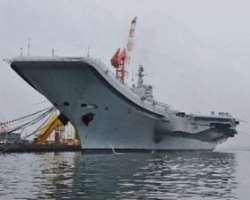 Taiwan is holding a two-day military drill simulating a fully-fledged invasion by Chinese forces. The exercises take place shortly after the Chinese aircraft carrier sailed through the Taiwan Strait.

The drills kicked off on Tuesday, 17 January, in an attempt by the Taiwanese government to reassure the public in the wake of China’s growing assertions in the region .

“The military has active measures to deal with the situation in the Taiwan Strait and the South China Sea, so the public can rest assured. We will enhance training 365 days a year,” said defence spokesperson, Chen Chung-chi.

Undertaken by the 10th Army Corps of the Taiwanese forces, the government said it was meant to test their combat readiness in case of an actual attack by China. The Taiwanese military pretended that China would mount a full-scale assault through its naval forces under the pretext of exercises amassing naval and airborne personnel. In the mock-up scenario, several helicopters took off the amphibious assault vessels to penetrate what is known as Air Defence Identification Zone (ADIZ) crossing the Taiwan Strait.

Taiwanese troops held positions beside the US-manufactured Avenger air defence missile system during the drills at the Taichung city. Sophisticated weapons from the Taiwanese arsenal including scout helicopters, Black Hawk choppers and Super Cobra attack helicopters were drafted in for the event.

Military personnel warned local media that the well-trained military personnel and the elite troops are not for entertainment purposes. In addition to the drills, Taiwan has also announced upgrade to some of its weaponries. “Taiwan is the first country in the world to upgrade the F-16 A/B fighters to F-16 V. We are enhancing our aerial capabilities to ensure national security,” an air force official was quoted as saying by AFP.

Photo: China’s sole aircraft carrier is seen at its shipyard at Dalian Port in northeast China’s Liaoning province, in this still image Reuters