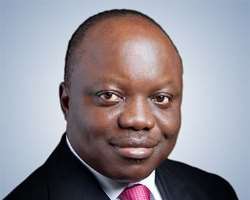 We've seen the hubris. And now we're seeing the scandals.

David Gergen
I am not certain if anyone has written a biography on the life of immediate past Governor of Delta State, Dr Emmanuel Eweta Uduaghan, but in a world where the internet never forgets and will stay generations to generations, may history not be unkind to us that we lived and nothing tangible about him can be found. Such stories are not meant for the classroom, but for children that will be born when we are no more, and need materials on how Delta State was unfortunate to have a certified treasury looter and chronic womanizer as her number one citizen. Sadly enough, these will be tales of disasters, testimony of woes and in-depth investigations of unending scandal and notoriety of power(s) in high places. May history not judge us wrong. May our names not be written in black. May the internet not record for us heartbreaking episodes of our days on earth that will haunt our children when our names are mentioned. Amen.

Uduaghan’s date of birth is meaningless as the public record of it is accurate. This piece is not to dwell on what the world already know, but on information never known or scarcely known to the world. This is his story; this is factual and can be contested in the court of law if need be and victory will be recorded the defendants. This is from the grapevine of sources that shaped his growing up, and grew disenchanted with his way of life. This is a painstaking investigation that Deltans, Nigerians, and the world may know some behind the scene details. His Birth, School, work, sexual relationships, his government, the Judges he bribed and regrets in and out of office. It is that moment that William Harvey sweetly talked about that “There is a lust in man no charm can tame: Of loudly publishing his neighbor's shame: On eagles wings immortal scandals fly, while virtuous actions are born and die”.

October was the day and for those who were there, his birth was not expected on that very day. The sun danced happily as if it was in connivance with an unseen drummer that beats for it, when the piercing cry of a woman in labor was heard. Rushed to a close maternity ward and was delivered by the matron. I’m pretty sure Uduaghan has forgotten her name.

On the very day he came to mother earth, the compound people rushed to call his mum’s older ‘aunty’, who gave him his first and subsequent bathes. The aunty is not one to bath a baby without a name. Bathing and tossing the new infant up, she looked at him with the eyes of motherly love. And then, she named him Abieba!

This aunt would later play a significant role in his life, but this writer is not sure if Uduaghan ever remembered her while in power, even though he’s known not to easily forget such kind of people. One of such moments will surface later.

He started his Primary School at Mosogar in Ethiope West before joining Federal Government College Warri (Ogunu) in 1968, yet never did anything for his Alma Mata for the 16 years he was in government. During the last Old Students Association, he refused to attend for fear of what may befall him from his mates. It can’t be taken away from him that he was one of the brightest brains while in FGC.

In his days at FGC, people like Prof Muoboghare who he made Commissioner for Basic Education, also schooled with him, even though he was some years his senior.

‘Boys’ like Chris Oghenechovwen (and I'm told Charles Ajuyah) came much later. Ibori's men: Prof GG Darah who was Dorm Captain in '68, Love Ojakovo came in for a year in '71. Mrs Grace Akpoguma-Ekpivwre, Delta Head of Service before becoming Federal Minister was with him around '68-69. Dere Otubu, a cousin & benefactor of James Ibori & Uduaghan is the most powerful civilian in delta since Ibori era till now also joined him later in FGC, before he travelled with his two younger sisters to Houston Texas in 1979.

In US, they were just timid newcomers. Their older step brother Dr John was already there. Dere Otubu (the former employer of Ibori in his dad's Senforce Insurance, VI, Lagos), is now a multi-billionaire many times over. A jolly good fellow that must not be discussed!

Otubu's dad is from Oghara; his mum an Itsekiri who's a sister to the grand dad of James Ibori as well as the grand dad of Emma Uduaghan. So Otubu is a cousin to both James & Emma's dads while Dere is their 2nd cousin but James & Emma are 1st cousins. Ibori grandmum is also from Oghara: his claim to Urhoboland for she brought him up with the name Onanefe. That (& many more) is by the way.

Done with secondary school, Uduaghan was admitted into University of Benin to read Medicine. His UNIBEN holidays were spent at the home of one of the children of the aunty who named him Abieba, one who later became Attorney General in Yakubu Gowon’s newly created states in the North after the Biafran War.

Not known to be a flirt in school, he focused on his academics and came out in good grades from the medical school. Could his lack of non interest in women then, be his weakness for devouring them when he finally became a Commissioner, Secretary to the State Government and finally a governor, or was his lack of interest due to rejection by his long time crush, Mabel Obar? Mabel, that gazelle that stole Uduaghan’s heart but won’t yield in to his request but like the tennis tossed it up and down and dashed away with it into another man’s bossom, or was Uduaghan merely on revenge mission against women for that singular act of Mabel (A story on its own for another day).

Done with his service, he began work at Delta Steel Company (DSC) Medical Center, Orhuwhorun and supplementing his level 10 income with part-time practice at a clinic opposite the Pry School at Oviri Street, Aladja -all in Urhobo land.

ENTRANCE INTO FULL POLITICS
Even before Ibori joined politics, his senior cousin was already involved but probably due to his poor financial status as a struggling physician, he could not be fully involved. Peoples Democratic Party (PDP) with its prospect came up and his destiny began. With Ibori’s entrance and subsequent victory as the governor of 1999, nobody else was fit to be his Commissioner for Health than his beloved brother, Uduaghan.

Under him as Commissioner for Health, few notes were diverted from his ministry. Authentic squealers revealed that he was only mastering the art of looting without getting caught, but in politics where everyone is a silent enemy to the next politicians, nothing can be hidden. Under your nose, the documents will leak and when you least expect, the witch hunt will begin.

Fast forward four years after; he was made the engine room of Ibori’s second tenure. The new political Prince has learnt the rope of moving heavy cash and no one must stop him. Brutal in dipping hands into the state coffer so was he also ruthless in doling it out to whomever that matters, not excluding his now insatiable demand for ladies within and outside Nigeria. His days as Secretary to the State Government (SSG) when he heartlessly diverted public cash for private purposes are yet to be unrivaled.

As SSG, Uduaghan single-handedly ordered for payment of over N300 million to unidentified persons guarding the pipeline, to stop vandals from destroying it. Despite this outrageous sum, the pipelines were still blown by militants.

The Joint Task Force (JTF) in Delta State fed fat, as Uduaghan ferried N100 million to them monthly in cash. This money was not paid through accounts as the officers feared it may be traced.

As SSG, he authorized payments that were made to Christine Ibie, Ibori’s elder sister in the range of £69,000 and another £79,000. He also moved N39 million to her in cash outside Nigeria using two suitcases. He used a company called KOLN to do so.

On October 5th 2004, he moved N700 million physical cash as payments to persons without identity. Five months after on March 14th 2005, he made a massive transfer of N950 million from Delta State vault to unknown persons, which sources said he merely compiled up to enrich himself.

As SSG, he was in charge of stealing billions of Naira for purposes not related to governance.

The scandalous biography continues…
These little things matter…
Fejiro Oliver is Editor In Chief of Secrets Reporters News, Investigative Journalist, Media Consultant and Human Rights Activist can be reached on +2348022050733 (SMS ONLY) or [email protected] . Engage him on twitter on @fejirooliver86.

When the news get hidden; be certain we will reveal it, as there is no place to hide...