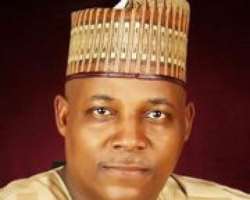 Commissioning the Dalori I IDPs Camp Safe Space for Women and Girls Clinic the UNFPA Executive Director and UN Under Secretary, Professor Babatunde Osotimehin said the organisation is ever ready to partner with the government to improve the living conditions of the IDPs, Empower women in the state especially the widows and promote girl child education among the IDPs children particularly the orphans.

He said UNFPA has established 11 safe space for Women and Girls Clinics across the state in different locations to complement the efforts of the state government and other donor agencies like UNICEF and the Nigerian Air Force at the Camps.

He said funds are available and the organization is willing to provide adequate resources for the women, girl child and gender health support programs as a contributor to the Nigerian government efforts in its rehabilitation and reintegration processes of the IDPs and their communities.

The Shehu of Borno, HRH , Alhaji Abubakar Garbai Ibn Umar El Kanemi commended the Executive Director of the UNFPA for his efforts and support to the State Government and IDPs as well as the Borno people in over coming their plight.

The royal father however appealed to the UN Under Secretary to support and Finance the women empowerment and girl child education programs effectively when UNFPA Executive Director paid him a courtesy call at his Palace.

Earlier, Governor Kashim Shettima had commended the UNFPA Boss and urged him to fully take charge of the provision of adequate medical and health facilities to all the comprehensive Clinics in the three senatorial districts of the state.

The Governor also urged the UNFPA to upgrade the Clinics to referral centers or hospitals and further train the medical and health personnel Manning the Clinics to realign with the upgrading.

Shettima also appeared to the Executive director to support the state government initiative on women empowerment and girl child education which have commenced in earnest in some LGAs.

He thanked the Minister of Women Affairs Hajiya Aisha Jummai Alhasaan for her efforts and support to work for children nation wide. She was on the entourage of the UN Under Secretary to Maiduguri on the one day state working visit.

Governor Shettima further appreciated the presence of UNFPA and services they have rendered so far in the state for decades assuring that his government will continue to partner with the UN in its rehabilitation, reconstruction and resettlement programs as some communities have been reconstructed and rehabilitated adding that some communities have returned and resettled following efforts of the military at liberating the areas.