Trump Presidency: A Catalyst For The Development Of Nigeria. 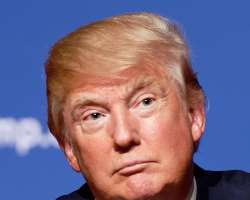 From the onset, the battle line was drawn between Donald Trump, an unusual man with new ideas, and the American establishment represented by the Clintons who invariably belonged to the old order. The presidential campaigns were heavily-laced with emotions, sentiments, lies, feminism, character assassinations and impeachments, hate speeches, accusations and counter - accusations, as well as promises and messages of hope and restoration. While Hillary Clinton ran a well-organized archetypal campaign that appealed strongly to the elites, Donald Trump's campaign was patternless, undiplomatic, and it targeted the ordinary American people - the people to whom power belonged, the masses who owned America and whom Trump promised that he would return America to. In the same vein, while Hillary Clinton pretended to be an impeccable angel, Donald Trump frankly admitted his human imperfections.

The power of the press as a double-edged sword which could serve as instrument for either information or misinformation, and the conspiracy between the American press and the American establishments manifested prominently in the campaigns. However, while Trump lost the imaginary media votes of the American press, he won majority of the actual votes of the people of America who refused to fall for Hillary Clinton's plethora of media hypes. Like the results of the BREXIT referendum, the electoral victory of Donald Trump is a lesson on the potency of the spirit [power] of the people or what the Dutch refer to as volksgeist . Truly, no one, nothing can stop a determined people from attaining their set goals!

For some reasons connected to Donald Trump's manifesto, the Trump presidential project attracted hatred and disdain from a great number of Islamic extremists, Nigerians, other African as well as developing countries. While some moslem fundamentalist antagonised Donald Trump's presidential project obviously because of his vow to rout terrorists, a larger number of people drawn from Nigeria, Africa and other undeveloped countries complain of Trump's immigration policy which is bent on deporting undocumented residents of America, shutting down all refugee camps and blocking the Mexican and all American borders to ward off illegal immigrants. Given the global economic recession and job losses that this policy will cause, one must admit that these concerns about Donald Trump's policy on immigration are genuine. This is more so in the light of the political and economic climate in the home countries of Africa and in some Asian countries which are characterized by instability, poverty, insecurity, unemployment, diseases and corruption.

As real as the concerns raised above may be, I dare to state [at the risk of being accused of sadism] that my nominal sympathy for the Trump presidential project were hinged on his policies on immigration and terrorism or world security. It is my guess also that the same issues and their implications for the 'silent majority of ordinary American citizens' gave Donald Trump the victory which has shocked the world and proved book-makers and fringe prophets wrong. Now that the American presidential election has been lost and won, I wish to state that Trumps immigration policy if followed through will be painful at the onset, but in the end it will serve as a catalyst for the development of Nigeria, Africa and, in deed, many other undeveloped countries of the world. According to Prof. Philip Emeagwali, "Nigeria is a West African nation of over 100 million energetic people. It is endowed with lots of natural resources but lacks human resources". This description of Nigeria is apt: It is our leaders' lack of the capacity to properly harness Nigeria's "energetic people" and "lot's of natural resources" that created the endemic problems which have continued to force our citizens to look for alternative home or country in America and elsewhere. The result of this miscalculation is that the finest Nigerian brains and fingers abandoned their country, abdicated their duties to their fatherland and found comfort in borrowed countries. Like all borrowed things, the use is but temporary, and if by Trump's presidency Americans intend to reclaim their country, there is nothing wrong with that. Yes, America is a fine place, but I wish to remind us that Nigeria is our country, and there is no other country we can call our own. Therefore, if we fail to develop Nigeria, no other persons will do it for us.Trump like Ola Rotimi in his classic, The gods are not to blame, seems to be reminding undocumented residents of America that the butterfly was not, is not and cannot be a bird! At this juncture, it suffices to say that this apparently hostile immigration policy of Donald Trump is just a positive challenge which, if well handled, holds a vista of promises for Nigeria, Africa and the rest of undeveloped countries of the world. The challenge which was best captured in the prophecy of G.K. Osei is that: Negroes (and, indeed, all races) must look around themselves, and not afar, for the instruments and forces that must be utilized for their salvation. Neither institutions nor friends can make a race to stand unless it has strength in its own legs. Races like individuals must stand or fall by their own merits. It is only through struggle and surmounting of difficulties that races, like individuals, are made strong, powerful and useful. This is the road the Negroe should travel; this is the road ... the Negroe will travel". (Brackets and underlinings are mine). The veracity of Osei's prophecy was manifested in the defunct Republic of Biafra: Threatened with genocide and starvation, having no weapons with which to defend themselves and nothing to feed on, Biafra looked up to "institutions and friends" for military aids and relief materials. Disappointed to her chagrin and driven by compelling necessities, Biafra established a Research and Production Unit (RAP) staffed by local scientists. This unit was responsible for the design of petrol distillation gadgets, homemade rockets, self-detonating anti-personnel and anti-vehicle mines, and even the production of toiletries and beverages including brandy! According to Arthur Nwankwo in his book, Nigeria: The Challenge of Biafra, "This period in Biafra's history can be called Biafra's finest hour...This period bore the promise of Biafra: the promise of the first technologically advanced black nation"!

Nigerian masses are once again challenged to build their country. I say this because with the natural resources that dot our entire landscape, the energetic population and the millions of cosmopolitan and hardworking returnees which British and American immigration policies will soon foist on the country we can build a virile Nigeria, a great country which can stand tall in the comity of nations. We can do this in spite of our inept leadership. The technological advancements recorded in the defunct Republic of Biafra, the Ghanian and the (8th November, 2016) American revolutions prove that the masses hold the aces in every country at all times. Let us therefore return to build Nigeria now because North, East, South or West, no place is like home!