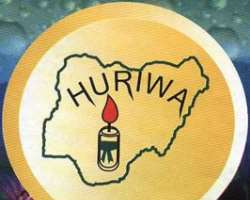 A Civil Society group- HUMAN RIGHTS WRITERS ASSOCIATION OF NIGERIA (HURIWA) has today made good its threat to begin global-wide campaign against the Kano State governor and his officials over the deliberate failure to prosecute killers of the Igbo woman killed in Kano by some Islamic extremists over alleged blasphemy.

In a media statement by the National Coordinator Comrade Emmanuel Onwubiko and the National Media Affairs Director Miss Zainab Yusuf, HURIWAdisclosed that it has sent strong worded letters to the Foreign embassies of members of the United Nations Security Council, the European Union and the ECOWAS.

Excerpts from the letter signed by the National Coordinator Comrade Emmanuel Onwubiko states as follows:

ON THE NON-PROSECUTION OF MURDERERS BY KANO STATE GOVERNMENT: A CALL FOR SANCTION ON GOVERNOR ABDULLAHI UMAR GANDUJE

We write to inform your good self that there is a serious case of failure by a state government of Kano in Northern Nigeria to abide by the Constitution of Nigeria and charge murder suspects before appropriate court of law in line with section 6 of the Nigerian Constitution which affirms that: “The judicial powers of the Federation shall be vested in the courts to which this section relates, being courts established for the Federation.”

Sir/Madam, may we refresh your memory on this said case of the murder by Islamic extremists of Mrs. Bridget Agbahime last year over alleged blasphemy which is absolutely an unknown criminal offence in any nationally accepted laws.

Apart from the serious danger of the progressive encouragement of lawlessness and impunity by the Kano State government in this aforementioned case, the continuous permission of the Kano State government officials to do business with officials of your home government will inevitably pass the message that the institutionalization of impunity and anarchy means nothing to respected democracies. We hereby urge you to use your strong diplomatic channels to compel the Kano State administration to arrest, prosecute and punish the killers of this 72 year old wife of a Christian cleric murdered in the street of Kano last year.

Sir/Madam, be gently reminded that in Nigeria as in most other democracies “it is unlawful to kill any person unless such execution follows a binding decision of a competent court of law.”

In this instance being discussed the 72 year old Mrs. Bridget was gruesomely murdered by boys who framed her up for alleged blasphemy of the Islamic faith even when Nigeria under the Constitution is a secular State (see Section 10 0f the Nigerian Constitution).

This means that the sacrosanct nature of life, may be breached by sovereign authorities – if to do so would make things even that is (for example) that he who kills, must also be killed. The above assertion is enshrined in section 33 of the 1999 Constitution of the Federal Republic of Nigeria, wherein the right to life is protected, but may be derogated in the interests of private defence of any person or to protect any person from unlawful violence, or for the defence of property, or killing in order to effect a lawful arrest, or killing done for the purpose of suppressing riot, insurrection or mutiny.

For all practical purposes, murder is the gravest offence in the criminal law and, in English law; mandatory life imprisonment is now the most severe sentence. In Nigeria, the sentence for murder is death.

Section 14(2) (b) of the 1999 Constitution of the Federal Republic of Nigeria (as amended): which specifies that the security and welfare of the people shall be the primary purpose of the state government.

But what happened was that Five suspects arraigned on Friday, June 10, 2016, in Kano over the killing of 74-year-old Bridget Agbahime for alleged blasphemy were freed.

A Kano Magistrates’ Court illegally discharged all the five suspects, who killed a trader, Bridget Agbahime in Kano on June 2 over allegations of blasphemy.

Mrs. Agbahime, 74, an Imo indigene, was murdered in Kofar Wambai Market in Kano over alleged blasphemy.

The Chief Magistrate, Muhammad Jibril, discharged the five suspects and terminated the case as advised by the attorney-general of Kano State.

The Principal State Counsel, Rabiu Yusuf, representing the attorney-general of Kano State, told the court that they received the case diary from the police on June 8 of last year and that having gone through the case diary, the attorney- general of Kano State evaluated the facts in accordance with Sections 130 and150 of the Criminal Procedure Code, presented the legal advice, Mr. Yusuf said.

Sir, this biased judgment had vindicated its position that there were different laws for different people in the country.

The District Court may try all serious criminal cases except murder, manslaughter and rape. The maximum term of imprisonment it can impose is 7 years.

This judgment that was delivered in favour of the killers of Mrs. Bridget Aghaneme who was murdered in broad daylight in Kano state by the Islamic fundamentalist is actually null and void in the first instance, because a Magistrate has no jurisdiction to try or sit on murder cases.

The implication of the charade is that the magistrate and the government of Kano State were instrumental to the killing of an innocent woman who committed no crime against Islam.

We hereby pray as follows:

Our objectives are;
v To deploy the members’ creative talents as writers to promote, protect and project the human rights of all Nigerians and other law abiding citizens resident within Nigeria;

v To organize periodic seminars and training workshops locally for human capital development specifically on the tenets and ideals of Human Rights and the rule of Law;

v To attend International Workshops and Seminars targeted at the promotion and protection of human rights;

v To conduct periodic studies on ways, means and strategies for promoting and protecting human rights of law abiding citizens;

v To highlight human rights challenges confronting the persons in conflict with the law and seek for constructive modalities for redressing such violations; and

v To recognize excellence and good governance standards in the polity through yearly award ceremonies for exceptionally good, tested and trusted leaders in both the corporate and public sectors. The process of selection would be by transparent mass participation strategies.

Be assured of our highest esteem and consideration.