2017 Promises Oneness and Strength for Ogoni 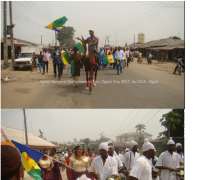 As Ogonis marked the 23rd Anniversary of the Ogoni Day, they have been reminded to keep their eyes on the ball.

In a brief remark, the president of Ogoni Central Indigenous Authority, OCIA, Dr. Goodluck Diigbo encouraged his fellow Ogonis to return to their villages; to fortify their self-government.

He told the celebrants, who had danced all day in Bori, the capital that they would reap what they have sown.

Let’s make 2017 a year of oneness for the Ogoni people, and fulfillment for our nation.

He praised the celebrants for their unwavering optimism in difficult circumstances.

Diigbo had played a central role to organize the first Ogoni Day in 1993, alongside his closest associate, late Ken Saro-Wiwa.

In 1990, Ogoni proclaimed the Ogoni Bill of Rights to attain political autonomy as an indigenous people in Nigeria.

And on the 2nd of August, 2012, Ogoni declared self-government to enforce the United Nations Declaration on the Rights of Indigenous Peoples.