PARTY SYSTEM: DILEMMA OF A NATION 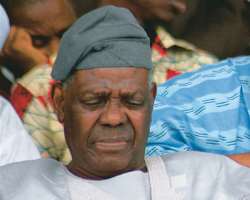 AC Chieftain, Bisi Akande
As members of the House of Representatives vote on the adoption of two-party system today (Tuesday), Kemi Obasola writes that this could be the beginning of the end for the 57 registered political parties in the country.

When members of the House of Representatives converge today, the amendment of the 2006 Electoral Act will continue; At their plenary session, the lawmakers are expected to vote on the adoption of the two-party system with independent candidature as a third option . Until the lawmakers vote, no one is sure where the pendulum will swing. Although analysts have observed that the die is already cast for the amendment of the constitution to accommodate either two or five-party system.

The issue of adopting two-party system generated so much confusion in the House last Thursday, to the extent that it was not just the faulty electronic voting machine that led to the postponement of voting over the issue. The Speaker, Mr. Dimeji Bankole, had to ask his colleagues, to consult with their constituents over the weekend before voting would take place today. The session was so rowdy with some members chanting pro-Peoples Democratic Party songs, while others left their seats to canvass support for the two-party or five-party system.

The rowdy session in the House last Thursday, was sequel to a proposal made by the Minority Leader of the House, Alhaji Mohammed Ndume, that the Electoral Act should clearly recognise two parties and independent candidacy. Ndume's proposal was premised on the fact that the multi-party system had failed in Nigeria because it neither encouraged healthy competition nor guaranteed a level-playing field.

His proposal, if it sails through, will, however, negate the stipulations of Chapter IV, Section 40 of the constitution, which states that: 'Every person shall be entitled to assemble freely and associate with other persons, and in particular he may form or belong to any political party, trade union or any other association for the protection of his interests.'

Therefore, to observers, section 80(1) of the Electoral Act cannot be amended without recourse to section 40 of the Constitution, even though there is already a provision for independent candidature.

Two party system is not a novelty in Nigeria. In the annulled election of 1993, two parties-the Social Democratic Party and the National Republican Convention competed for the control of the Presidency. The SDP won the election, which has been adjudged the freest and fairest in the country's democratic history.

Unlike the present multi-competitive party system, which paved the way for the registration of 57 registered political parties, the military in the third republic, used the two-party system, to entrench the return to civil rule - a move which was later truncated. In experimenting with the two-party system, the military government of Gen. Ibrahim Babangida (rtd), through its 17-member political bureau led by Prof. Sylvanus Cookey, had proposed the limitation of political parties to two, to ensure that, 'Nigeria's future politics would be based on principles and not ethnicity. Membership of the two political parties must also be open to every Nigerian irrespective of place of origin, sex, religion or ethnic grouping.'

As a build-up to the 1999 election and the eventual return to democratic rule, more political parties were registered, and the PDP has remained the ruling party since the beginning of the Fourth Republic.

Yet, some governors and members of the National Assembly, are opposed to the return to two-party system. Some of them have suggested a multi-party system with at least five political parties. A member of the House of Representatives from Anambra, who was elected on the platform of the PDP, Mr. CID Maduabum, told journalists that 'the military decreed into existence a two party system, such a system now will be too restrictive and undesirable now.'

However, the fear of the two-party system stems from the fact that the PDP could eventually be consumed and lose its members to the opposition because it currently has many aggrieved members.

Even the Chairman of the Action Congress, Chief Bisi Akande, has lent his voice to the call for the two-party system, saying, 'It is a step that can guarantee stability in the nation's polity. Two-party system is desirable if it is allowed to evolve. Otherwise, it would be against human rights' freedom of choice. Many politicians have taken undue advantage of the multi-party system for self-serving reasons. There should be laws to check frivolity in the country. There should be no subvention for political parties scoring less than one-third of votes cast per state House of Assembly contested by political parties.'

The AC through its National Publicity Secretary, Alhaji Lai Mohammed, said that, 'The present situation where there are over 50 political parties is a nightmare for us. In reality, there are less than five or six genuine parties in Nigeria with national appeal and strength.

'Having 57 or more parties on the ballot paper every time we have an election is quite unwieldy. It makes electoral malpractice much easier. Our party wants the number of political parties to be reduced to five or six.

'We believe in freedom of association, but as pragmatists, 57 parties can't pave the way for electoral sanity. We are asking for five or six political parties if at all it will be legislated. However, a two-party political system is by far preferable to the present 57 political parties.'

However, the Conference of Nigeria Political Parties has threatened to sue the National Assembly if it reintroduces the two-party system. It's Chairman, Alhaji Balarabe Musa, said the move was against freedom of association which is enshrined in the constitution.

He said, 'It will be a return to the days of Babangida and we will attack that at any length because the constitution gives us freedom of association. We know they can amend the constitution, if they do so we can attack them on the basis of natural justice.

'This move will not only impede the freedom of association of political parties, but it will also be a threat to civil society organisations.'

One of the dissenting voices within the House is its Chairman, Committee on Rules and Business, Mr. Ita Enang, who described the proposal of a two party structure as a contamination of the constitution and the Electoral Act.

'The provision of the constitution does not allow us to pass any law restricting the number of political parties and we cannot pass any law in anticipation of an amendment of the Constitution,' he said.

What is however unclear is if, the idea of two-party system sails through, the parties that emerge would be formed along ethnic lines. This precedent was laid in the First Republic. Also, in 1978, parties that were registered in preparation for the 1979 return to civilian rule, were formed along ethnic lines. The parties formed then, could be traced to different ethnic groups, notwithstanding the fact that the constitution stipulated federal character in leadership and reach of a party as a prerequisite for registration.

The National Party of Nigeria, the Unity Party of Nigeria and the Nigeria's People Party were often described as offshoots of the old Northern peoples' Congress, Action Group and National Council of Nigerian Citizens respectively.