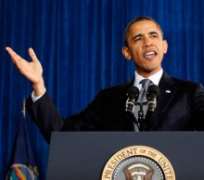 President Barack Obama's administration announced, on Thursday, the transfer of four detainees from the detention facility at Guantanamo Bay to the Government of the Kingdom of Saudi Arabia.

The action is against the advisory of President-elect Donald Trump.

“As directed by the president's Jan. 22, 2009, executive order, the interagency Guantanamo Review Task Force conducted a comprehensive review of these cases.

“As a result of those reviews, which examined a number of factors, including security issues, Al-Shibli and Bwazir were unanimously approved for transfer by the six departments and agencies comprising the task force. “Periodic Review Boards consisting of representatives from the Departments of Defense, Homeland Security, Justice, and State; the Joint Chiefs of Staff, and the Office of the Director of National Intelligence determined continued law of war detention of Kanad and Ghanim does not remain necessary to protect against a continuing significant threat to the security of the United States.

“As a result of those reviews, which examined a number of factors, including security issues, Kanad and Ghanim were recommended for transfer by consensus of the six departments and agencies comprising the Periodic Review Board.”

The Department said the Periodic Review Board process was established by the president's March 7, 2011 Executive Order 13567.

It added that the final date of Periodic Review Board final determination for Salem Ahmad Hadi Bin Kanad was May 5, 2016, while that of Muhammed Rajab Sadiq Abu Ghanim was July 6, 2016.

“The United States is grateful to the government of the Kingdom of Saudi Arabia for its humanitarian gesture and willingness to support ongoing U.S. efforts to close the Guantanamo Bay detention facility.

“The United States coordinated with the government of the Kingdom of Saudi Arabia to ensure these transfers took place consistent with appropriate security and humane treatment measures.

Trump had on Tuesday said there should be no more prisoner releases from the U.S. military detention facility at Guantanamo Bay, Cuba.

“There should be no further releases from Gitmo.
“These are extremely dangerous people and should not be allowed back onto the battlefield,'' Trump said.

President Barack Obama had sought to close the prison since he entered office in 2009, but has been unable to carry out the plan in the face of opposition from Congress.

Obama, in Nov. 2016, announced renewed plans for closing the facility in 2017, indicating he would release more prisoners in the final weeks of his term in office, which ends on Jan. 20.