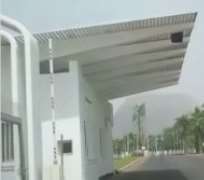 The Presidency has reassured that the Presidential Villa, Abuja, the seat of Power, is safe and well secured to all citizens and foreigners alike.

Malam Garba Shehu, the Senior Special Assistant on Media and Publicity to the President, gave the reassurance in a statement he issued in Abuja on Thursday.

He explained that the security official involved in the incident was not attached to the Presidential Villa but a visitor, who was at the State House on the fateful day, in respect of an ongoing investigation into a certain case.

He said the security operative and a lady, who sustained injuries as a result of the accident, had been medically treated and discharged from a medical centre in Abuja.

The statement read: “Following an incident involving the accidental gun discharge in the State House on Wednesday, the Presidency wishes to reassure all Nigerians and foreigners of the safety of the seat of power in the country.

“According to the reports received so far, the security official involved is not attached to the State House.

“Rather, he came on invitation as a witness in an ongoing investigation and was required, as is the rule, to surrender his weapon at the gates before entry.

“It was in the process of conducting the normal safety precaution as professionally required that the pistol accidentally fired.

“Unfortunately, the security operative and the lady by his side, a caterer in the State House, were hit by a pellet of the bullet.

“Both of them were attended to at the clinic and discharged.''