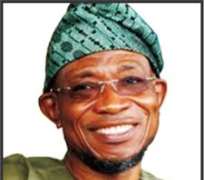 The Government of Osun on Tuesday congratulated the Federal Government of Nigeria for successfully taking off at least two major socially impactful welfare programmes which it said would go down to ease social tension and motivate the poor.

The Government, in its message signed by the Director, Bureau of Communication and Strategy Office of the Governor, Mr Semiu Okanlawon, said given the experience Osun gathered in its introduction and implementation of the Osun Youth Empowerment Scheme and the social welfare for Osun's most vulnerable old people called Agba Osun, the Muhammadu Buhari-led Federal Government has touched on the very aspects of national life that had contributed to youth restiveness, kidnapping, other crimes and care for the desperately poor.

With the impact of two programmes of the Rauf Aregbesola administration in the state of Osun in our six years of, the Osun Youths Empowermemt Scheme (OYES), and the social protection programme for the elderly (Agba Osun), there is no doubt that the Federal Government has found solutions to many of the factors at the heart of Nigeria's socio-economic complications; attenuating poverty.'

The Bureau said through the OYES, the Osun government was able to regenerate the economy with the injection of N200 million monthly into the economy. This, it said, redirected the energies of the hitherto despondent youths to more socially and economically viable and productive ventures and consequently lured them away from socially harmful engagements.

"Our strategic selection of 20,000 in each of the batches of the OYES scheme, from the over 250,000 applicants which exposed the problems of unemployment, has helped Osun to record some of the achievements which were confirmed by the National Bureau of Statistics (NBS) and other agencies of the federal government and private organizations.

"For instance, Osun emerged state with the lowest unemployment rate. Osun, with its very low level of income, emerged 7th largest economy in Nigeria. The state has also been adjudged most peaceful, crime-free state even by the leadership of the Nigerian Police."

The Bureau said the commencement of the payment of another N5,000 monthly to its verified poorest and most vulnerable in the society just as the Agba Osun scheme which pays N10,000 to 1,602 carefully selected most vulnerable elderly persons in the state would go a long way to reduce poverty, crime and other social vices which are at the heart of social instabilities in Nigeria.

The Bureau also urged the Federal Government to intensify its efforts at achieving a nationwide implementation of the school feeding programme.

"This has been a major influencer in our strategic restoration of functional education, health, increased schools enrollment and job creations.

"The feeding of over 252,000 pupils every school day in the Elementary school class has brought fortune to agriculture, women empowerment and many other benefits too numerous to list. This is why Osun has been the training ground for many of the states ahead of their implementation of the school feeding programme."

The Bureau noted however that it is gratifying that the Rauf Aregbesola administration suffered unrivaled vilification and condemnations while introducing and implementing these socially impactful schemes.

"The government was determined unwavering in the face of unsparing criticisms over OYES and other social protection schemes because this government was convinced these are the ways to go if we must solve the problems that stared us in the face in youths unemployment, increasing crime rates, loss of values and social instabilities and grinding poverty.

"We were not surprised when in 2014, the World Bank adopted our OYES scheme as template for its similar programme for Nigeria called the YESSO."

The Bureau assured Nigerians that the nation's many problems are not beyond redemption adding that with the implementation of social welfare programmes such as N-Power, and others for desperate poor and women, Nigeria is on her way to arrest her decline, recover from doldrums and ascend to greatness.