2017: Here are two prophecies by RCCG's Adeboye and MFM's Olukoya which are exactly thesame 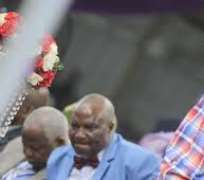 Remarkably, to respected Nigerian clerics, The General Overseer of The Redeemed Christian Church of God (RCCG), Pastor Enoch Adejare Adeboye, and his Mountain Of Fire and miracle ministries’counterpart,  Pastor Dr. D.K Olukoya, have hit the same chords their predictions for 2017.

Adeboye during the 2016 Cross Over service at the Redemption Camp Kilometer 46, Lagos -Ibadan Expressway, on December 31 released nine predictions.

Two of them were the same those released by Olukoya,who made over 50 predictions for the year.

Both of the clerics are foreseeing huge weather challenges across the world in form of monster earthquakes,hurricanes, typhoons, tsunamis and their likes.

Olukoya on the same score predicted, “Serious prayers to avoid unprecedented commotion on the earth, manifestation through earthquake, hurricanes, etc.”

They share similar prophecy for soul winners. According to them, God will giv speed response to prayers of soul winners in the new year.

According to the RCCG’s General Overseer,  “Soul winners will see their prophecies fulfilled almost as soon they are uttered”.

Olukoya said on his words that the year will be “A year of breakthrough for those who are fishers of men.”

Read his prophecies below.
For Nigeria
1. 2017 will be a year of surprises both for the oppressed and the oppressor. Surprise is a two edged sword

2. Those deliberately making life for the common man will be relocated

3. The downward plunge will slow down, stop and reversal will begin

6. There will be quite a large number of weddings
7. Soul winners will see their prophecies fulfilled almost as soon they are uttered

At the international scene
8. There will be surprises for many world governments

Olukoya on his part said the year (2017) will be a year of victory and deliverance to God’s faithful people.

Below are his prophecies as announced in the cross over night service:

My Year of Indisputably Victory and Uncommon Deliverance.

Proverbs 11vs 21. Number 32vs23.
Sin is addictive, sinner in one department of his life is a sinner around. Sin is the greatest infection.

Sinner can change the name of sin but God has not change his attitude towards sin. Sin shall find you out. Sin is choosen but you can not choose the consequences.

Categories of Christians
Human beings will be divided into three categories as ;

God want you to manifest as the salt of earth. Too many Christians are failing to this. Be the salt of the earth.

*Salt preserves
* Salt flavours
* Salt penetrate
* Salt walks quietly and cleanses
* Salt has value
* Salt holds water
* Salt heals and it retaliate when necessary.
You can fill your self with sugar and it will hurt you but salt Persist. 24.A year where those who deeply love the lors will not be nonved by tg poltical things.

Motto: Is there any word from the lord?