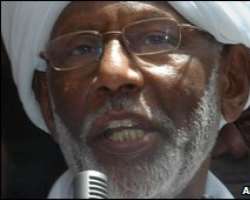 Sudanese authorities have arrested Islamist opposition leader Hassan al-Turabi, his family and senior members of his party have said.

His wife told the BBC she thought he was arrested for repeating in a newspaper interview his allegation that elections last month were rigged.

President Omar al-Bashir was re-elected with 68% of the vote in Sudan's first multi-party vote in 24 years.

Mr Turabi's party was one of the few opposition groups that took part.

Sudanese officials have not confirmed the arrest.
Mr Turabi was once a close colleague of Mr Bashir but he lost out in a power struggle between the two in 1999.

He has been imprisoned or held under house arrest on several occasions, most recently for about two months early last year.