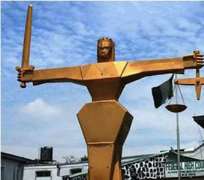 The Court of Appeal in Lagos on Thursday affirmed the judgment of a Lagos High Court in Igbosere sentencing a former Divisional Police Officer (DPO) attached to Pen Cinema Police Station in Agege, Segun Fabunmi to 10 years imprisonment for the killing of one Ademola Aderintola Daramola during the January 9, 2012 protest against fuel subsidy removal in Lagos.

Justice Olabisi Akinlade of Lagos High Court had, on December 14, 2015, convicted and sentenced Fabunmi to 10 years jail term for manslaughter following the death of Ademola during the fuel subsidy protest in Lagos.

Fabunmi, of No. 12 Oyewole Street, Ogudu, Lagos, who joined the police in 1984, was arraigned on May 5, 2013 by the Lagos State Government on a seven-count charge bordering on murder, attempted murder and causing grievous bodily harm.

Dissatisfied with the Lagos High Court judgment, Fabunmi filed a notice of appeal at the Apeal Court in Lagos to challenge the judgment of the lower Court, and urged that it should upturned.

Fabunmi's counsel, Mr. C.J Jiakponna, had specifically urged the court to allow the appeal and acquit the appellant.

On the other hand, the Lagos State Government represented by the State's Attorney-General and Commissioner for Justice, Mr. Adeniji Kazeem, urged the court to affirm the decision of the lower court and dismiss the appeal for lacking in merit.

The court specifically punctured the argument of the appellant saying that the defence of accident and self-defence would not avail the appellant because 'these defences were mutually exclusive.

'The appellant, being a seasoned police officer, could have reasoned to use rubber bullet, teargas etc on the mob rather than resorting to lethal weapon (AK 47).

'The use of AK 47, a lethal weapon, convinced the lower court that the appellant had intention to cause grievous bodily harm and the defence of accident could not avail the appellant since there was clear evidence that he shot at the deceased and other persons,' the Appeal Court held and dismissed the appeal for lacking in merit.