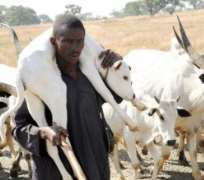 SAN FRANCISCO, December 28, (THEWILL) – The National Human Rights Commission, NHRC, says the time had come for the security agencies to come up with a solution to the incessant attacks by herdsmen on host communities.

The acting Executive Secretary of the commission, Mrs. Oti Ovrawah, who handed this charge, called on security agencies to stop herdsmen from killing innocent people and destroying their properties.

The commission's head of media relations, Mrs. Fatimah Agwai Mohammad, in a statement, stated that the NHRC Executive Secretary spoke in reaction to the unabated attacks by herdsmen in southern Kaduna.

The statement read: “Time has come for the government and security agencies to ensure effective protection of lives and property of defenseless Nigerians who have been victims of incessant attacks by suspected herdsmen in the country, Ag Executive Secretary of the National Human Rights Commission, Mrs. Oti Ovrawah has said.

“Ovrawah who made this call in Abuja while reacting to the recent report of the attacks by suspected herdsmen which led to the loss of lives and property in southern Kaduna, Kaduna State as well as similar reports in different parts of the country, noted that the government and the security agencies must act fast to put a stop to these callous acts.”

She called on the security agencies to be more proactive, professional and committed in the discharge of their duties in containing persistent attacks by herdsmen, adding that there was an urgent need to prioritise preventive measures to curtail these attacks.

The NHRC boss disclosed that the commission had received some complaints on the alleged attacks by herdsmen and would partner with other stakeholders to work out amicable solutions to the avoidable attacks.

She noted with regret that the incessant attacks had led to thousands of deaths accompanied by countless cases of displacements.

Ovrawah went on to advise communities to embrace the age-long beneficial relationship of peaceful coexistence and to desist from taking arms against themselves.

While observing that conflicts were usually fuelled by human rights abuses, she stated that addressing these abuses required an inevitable process of peace building.