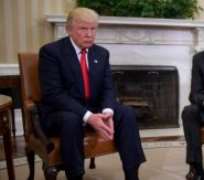 Donald Trump can't decide whether he thinks the transition of power is going well or not.

But he knows he doesn't like how much attention Barack Obama is getting and is also bothered by what Trump and his closest advisers see as an active effort to poke the president-elect and undermine the incoming administration with last-minute policy changes on his way out of office, according to two people close to the transition.

And the relationship is likely to get worse in the three weeks until the inauguration: Obama is scheduled to give a farewell address Jan. 10 that is expected to be a recounting of his successes and an inherent contrast with Trump and the administration is rushing to make public a report on Russian hacking during the election that intelligence officials say was done to help Trump, though the president-elect has disputed that entirely.

The president-elect's latest Twitter attack on Wednesday morning — “Doing my best to disregard the many inflammatory President O statements and roadblocks. Thought it was going to be a smooth transition – NOT!” — was followed, true to Trump form, six hours later by Trump telling reporters who asked whether the transition was going smoothly, “Oh, I think very, very smoothly. Very good. You don’t think so?”

In between, Trump had a phone call with Obama. The word of the day was smooth, with White House spokesman Eric Schultz saying that this conversation, “like the others since the election, was positive and focused on continuing a smooth and effective transition.”

Wednesday night, in response to a question from a reporter, Trump went even further to move past the situation.

Behind the theater is bubbling frustration for many involved.

Trump leapt right into the middle of what has been Obama's most troubled relationship with a foreign leader, eagerly taking Israeli Prime Minister Benjamin Netanyahu's side against the administration's abstention from a United Nations vote condemning the construction of Israeli settlements.

Trump also has been irked, according to transition officials, by other recent moves by the outgoing president. Obama's decisions to permanently ban oil and gas drilling in portions of the Arctic and Atlantic oceans, to eliminate dormant regulations requiring males from certain largely-Muslim countries to register with immigration authorities, and to issue pardons and commutations have also raised eyebrows around the president-elect.

The spite is being churned by an Israeli prime minister who has long proved to be one of the most adept players of American politics — and who leapt on Twitter himself Wednesday, pre-butting Secretary of State John Kerry's speech criticizing his government with a thank you message to Trump for “your warm friendship and your clear-cut support.”

Trump is “frustrated by the president’s public comments” on the Russian hacking and “the whole 'Israel situation,'” according to one person who has spoken to the president-elect, referring to the ongoing drama around last week's U.N. vote. Trump aides and Obama administration officials talked little in the run-up to the vote, leading to a sharp and public divergence between the current administration and the transition on foreign policy, unlike anything in modern American history.Most of all, though, Trump is frustrated with how Obama has poked him, by claiming in a podcast interview with former adviser David Axelrod that he could have beaten Trump had he been eligible to run again. (The president made that claim as part of an insistence that his kind of positive, hopeful campaign would have resonated with Americans, despite what Trump successfully tapped into.)

Trump was also irritated by Obama's comments at Pearl Harbor on Tuesday afternoon in which he said, “even when hatred burns hottest, even when the tug of tribalism is at its most primal, we must resist the urge to turn inward. We must resist the urge to demonize those who are different.” These felt to Trump like direct criticism of the president-elect, according to two people close to Trump.

Obama administration aides deny that the president was talking about Trump. And the White House is pointedly not responding to Trump's tweets.

A senior administration official said Trump is wrong if he thinks Obama's aim is to disrupt the transition by highlighting Russia's role in the campaign, ordering the abstention on the Security Council vote on the Israel resolution and laying out his more globalist worldview as part of a speech at Pearl Harbor that was meant to address the right-wing nationalism going on all over the world.

“That is not evidence of a flawed transition,” the official said Wednesday afternoon. “That is evidence that we have starkly different opinions.”

Though Obama and Trump spent an hour and a half together in the Oval Office two days after the election — the first time they had ever actually met — and continue to talk on the phone, no one is under the impression that they've become friends, or actually like each other.

Nonetheless, neither Obama nor Trump aides appear to know what the president-elect means by “roadblocks.”Obama chief of staff Denis McDonough has been in regular touch with incoming chief of staff Reince Priebus, Earnest has been talking with incoming White House press secretary Sean Spicer, outgoing and incoming national security advisers Susan Rice and Michael Flynn have continued to be engaged, and other senior aides throughout the White House have been in touch with their transition counterparts, both White House and transition aides confirm.

A Trump transition aide described the relationship as friendly, with lots of logistical help through top-level meetings and phone calls.

Obama White House aides make the case that despite their differences, they have been focused on getting the new administration up to speed, which makes the president-elect's comments over the smoothness of the transition more confounding.

The White House team is also frustrated with Trump's policy statements — not just over what he did in regard to Israel, but by his hosting of a meeting with the Japanese prime minister in November, speaking by phone with the Taiwanese president despite the objections of China and beginning to map out a new framework of a relationship with Vladimir Putin.

Not only were these arranged without first informing the current administration, but they've created a level of confusion about American policy appearing to be driven by two different leaders at once.

Still, asked Wednesday during the daily transition-briefing call whether Trump and Obama will continue to speak regularly in the run-up to the inauguration, despite the president-elect's recent barrage, Spicer said he expects them to, and that those conversations are part of a transition that sounded notably smooth in his telling.

“As the inauguration gets closer, both the current president and his team have been very helpful and generous with their time as far as the actual transition, the mechanics of the transition, have gone, and I expect them to continue to speak fairly regularly,” Spicer said.

The transition aide did cite “some tension within the agencies” — without getting into specifics, citing incoming Cabinet secretaries who've been complaining that the outgoing teams are not being helpful, despite Obama's direction from the West Wing.Not everyone's been keeping quiet about dismay with Trump. Obama's Housing and Urban Development Secretary Julián Castro has been firing off his own attacks on Twitter, writing from his personal account, “So Trump—the shadiest, most corrupt guy to take the Oval Office, will have no strong federal checks and balances. Has to change #2018,” and “Trump is so corrupt that if Democrats controlled even one chamber of Congress, he'd be done before he even started. #2018.”

Castro is seen as a potential 2018 challenger to Texas Sen. Ted Cruz.

None of that, however, has likely been raised with the president-elect himself, according to people familiar with the transition.

In the meantime, Trump continues to tweet about how much he's going to upend Obama, writing: “We cannot continue to let Israel be treated with such total disdain and disrespect. They used to have a great friend in the U.S., but not anymore. The beginning of the end was the horrible Iran deal, and now this (U.N.)! Stay strong Israel, January 20th is fast approaching!”

Norm Eisen, the former ethics czar for the Obama White House and a member of Obama's 2008 transition team, put the blame on Trump, whom he said seemed to be reacting in part to the new sanctions that the administration is aiming at Russia in response to the hack.

“The Obama team has bent over backward to be accommodating, exceeding even the high standard set by Bush 43 in '08,” Eisen wrote in an email. Trump, he added, “is creating friction by forgetting the first principle of transitions: there is only one president at a time.”

Andrew Restuccia contributed to this report.
Photo: President-elect Donald Trump meets with President Barack Obama in the Oval Office at the White House on Nov. 10. | Getty