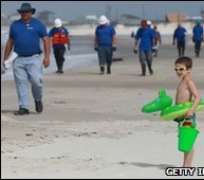 The US government has demanded immediate clarification from BP over its commitment to pay for costs caused by the oil spill in the Gulf of Mexico.

The Obama administration said it wanted to be sure BP would honour commitments not to limit payments for damages to a US statutory cap of $75m (£50m).

Meanwhile, BP says oil dispersants applied at the source of the leak on Friday have begun to take effect.

Mississippi has become the third US state to have oil wash up on its coast.

Crude has already contaminated beaches in Louisiana and Alabama since a drilling rig blew up on 20 April, killing 11 workers.

'Ridiculous spectacle'
US Interior Secretary Ken Salazar and Homeland Security Secretary Janet Napolitano noted in a letter on Saturday to BP chief executive Tony Hayward that the firm had repeatedly pledged to assume all costs for the spill.

“The public has a right to a clear understanding of BP's commitment to redress all of the damage that has occurred or that will occur,” the letter continued.

“Therefore, in the event that our understanding is inaccurate, we request immediate public clarification of BP's true intentions.”

The officials said they hoped BP would not seek to rely on a statutory cap on how much oil companies must pay for such leaks.

It is not clear what prompted the letter as BP said last week the $75m cap was irrelevant and the firm would pay for all costs and legitimate claims.

On Friday, President Barack Obama suggested BP and other firms were trying to duck responsibility, as he condemned a “ridiculous spectacle” of oil executives shifting blame in US congressional hearings.

Mr Obama has stopped all new drilling for the moment and a number of politicians want that to become permanent.

Early on Friday, BP began trying to thread a 6in-wide (15cm) tube into a damaged 21in-wide pipe on the ocean floor a mile beneath the surface.

Like a long straw, the tube is intended to slurp oil to a ship on the surface, and a stopper surrounding it would stem the flow of crude into the sea.

After its first attempt failed, the company announced it would try again on Saturday night.

BP also said the underwater chemical dispersants it began to use on Friday were already resulting in less oil rising to the top of the ocean.

Ice crystals
BP's chief executive earlier told the BBC's Today programme he hoped the leak could be stopped within 10 days.

But the worst case scenario was “more than that, and it's impossible to say how much more”, Mr Hayward added.

A week ago, BP tried to cap the well with a 100-tonne box, but gave up after it became encrusted with ice crystals.

Some scientists have begun to cast doubt on official estimates of the rate of oil flow, saying the widely repeated figure of 5,000 barrels of oil per day dramatically understates the real amount.

The spill is threatening to eclipse the 1989 Exxon Valdez leak off Alaska as America's worst environmental disaster.